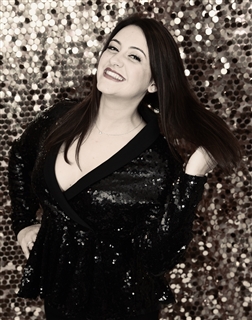 Kristin (Grassi) Cochran is an accomplished lead and background singer with 20 years performance experience encompassing classical, pop, rock, jazz and theater styles. She holds a Bachelor of Arts in Music with a concentration in Vocal Performance from Kutztown University of Pennsylvania and is in the process of completing her Masters degree in Voice Pedagogy from Westminster Choir College in Princeton, New Jersey. While completing her undergraduate, Kristin was awarded DownBeat Magazine's "Best College Jazz Vocalist in the Nation".

Kristin began her love of singing in theater and has had leading roles in various stage productions of "Footloose", "The Rocky Horror Show", "You're A Good Man Charlie Brown", "Bye Bye Birdie", "Into the Woods", and "Snoopy!", to name a few. She also worked at the famous piano bar "Don't Tell Mama" in Midtown Manhattan, where she sang alongside Broadway and movie stars alike.

Kristin is one of the most versatile singers in the tri-state area, having been featured in Broadway reviews, jazz bands, rock tributes and classic rock bands. Some of her favorite theatre review shows have included Roy Orbison, David Bowie, Tom Petty and The Who. She spends the majority of her time working on various styles and genres of music, making her a marketable, working professional. In 2012 she joined the Jersey Shore's legendary rock band, Brian Kirk & The Jirks and in late 2019 started her own project, The Cliffs Band (www.thecliffsband.com), where she leads a band of 8 professional musicians, playing weddings, bars and corporate events.

In addition to teaching at Kutztown University, Kristin runs a private voice studio from her home, where she coaches students in pop/rock/country and theater styles