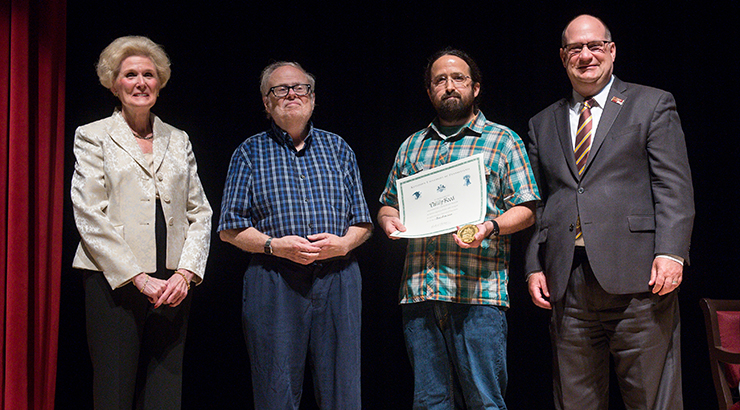 Dr. Reed was awarded the Chambliss Faculty Research Award during KU's Faculty and Staff Convocation and Celebration on Friday, August 24, 2018.

KUTZTOWN, Pa. - Kutztown University professor of physics and astronomy, Dr. Phillip A. Reed, will deliver the spring 2019 Chambliss Faculty Research Awards lecture Tuesday, April 30, at 4:30 p.m. in the McFarland Student Union Building's Alumni Auditorium. The lecture is free and open to the public.

Reed will present "Discovering the Stars: From Interacting Binaries to Exoplanets." During his lecture, Reed will discuss his journey as an observational astrophysicist, how he has measured the stars and his findings along the way. The audience will learn about the methods of photometry and spectroscopy, and Reed will share a selection of exciting research results that reveal mass transfer between stars, stellar magnetic fields, pulsating stars and newly discovered exoplanets.

In Sept. 2018, Reed was awarded the Chambliss Faculty Research Award during the university's Faculty and Staff Convocation and Celebration.

Reed serves as the director of the KU Planetarium and Observatory, is an active participant in the KU Astronomy Outreach Program and was a councilor in the Physics & Astronomy Division of the Council on Undergraduate Research (CUR). Reed was also instrumental in KU's earning of the National Science Foundation's (NSF) International Research Experiences for Students (IRES) grant for student exoplanet research with the KELT project and collaboration with the University of Southern Queensland. He is a member of the International Astronomical Union (IAU) and the American Astronomical Society. Reed has authored and co-authored more than 20 peer-reviewed journal articles on exoplanets, interacting binary stars, ultraviolet spectroscopy and differential photometry, among other subjects.

The Chambliss Award, inaugurated in 2004 through a gift from Dr. Carlson R. Chambliss, professor emeritus, is meant to recognize the very highest achievement in research and scholarship and can be awarded only once in a person's career.