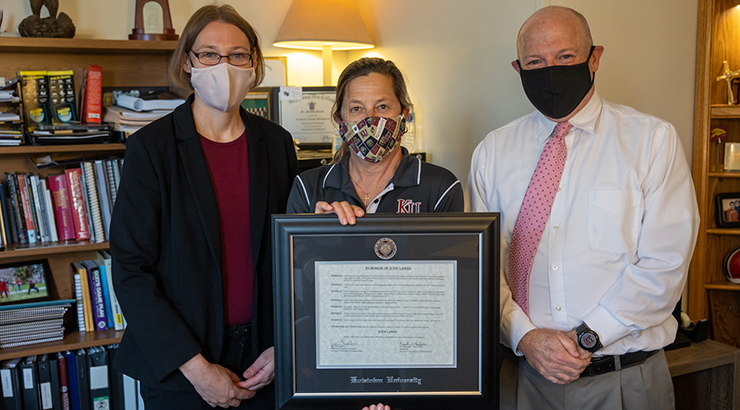 WHEREAS,  Judy Lawes has provided nearly 34 seasons of service to Kutztown University as the head coach of its NCAA Division II softball team, and is currently 1-of-8 active softball coaches in Division II, and the second in the Pennsylvania State Athletic Conference (PSAC), to coach for at least 30 years.

WHEREAS,  Coach Lawes’ teams have amassed a .639 winning percentage and 32 winning campaigns to rank her 14th in Division II all-time in wins.

WHEREAS,  Under Coach Lawes tutelage, KU softball has advanced to the NCAA Division II Tournament 18 times, including one appearance in the national title game.  Her teams have earned a berth to PSAC Tournament 19 times, winning the PSAC East title seven times and the program's first-ever PSAC Championship in 2013.

WHEREAS,   Coach Lawes has coached numerous All-Americans and All-PSAC performers, and 11 members of the Kutztown University Athletic Hall of Fame, while graduating hundreds of student-athletes.

WHEREAS,  On Sunday, March 21, Coach Lawes reached a career-defining milestone --- with a 12-1 win over Bloomsburg, Coach Lawes earned her 1,000th career victory.

WHEREAS,  Coach Lawes has become the 39th coach all-time at any level in NCAA history to reach 1,000 wins as a head softball coach. She is the 22nd active coach at any level and the sixth active Division II coach to achieve the feat.

WHEREAS,  Coach Lawes is the first coach in any sport in the 125-year history of Kutztown University Athletics to record 1,000 victories.

THEREFORE, BE IT RESOLVED, that the Kutztown University Council of Trustees, do hereby recognize and commend Judy Lawes for her 1,000th career win, and her many outstanding accomplishments and contributions to our university.