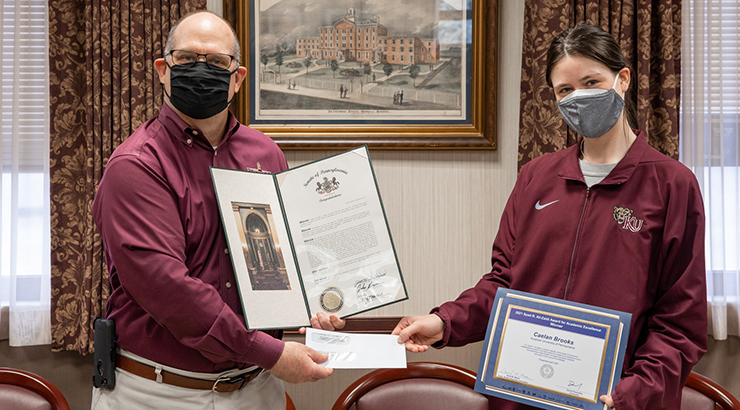 A native of Bear, Del. and Appoquinimink High School, Brooks is a member of the KU Honors Program and has conducted high quality physics research that has led to innovations in two separate areas of physics: atomic molecular and optical (AMO) physics and biophysics, resulting in one peer-reviewed paper published and three more in development. Her work has been recognized by multiple awards and by acceptances into some of the top physics doctorate programs in the world. Brooks will continue her education at Harvard University.

Her research in AMO physics is related to the study of ultracold atoms trapped in a ring-shaped lattice, for utility in precision sensing, simulations and information processing. Her first published paper clarified the coherent dynamics in such lattices, with the discovery of two distinct regimes of behavior. Her upcoming papers in development explore how a seminal model in physics, the Quantum Hall effect for electrons in magnetic fields, can be implemented with ultracold atoms in ring shaped lattices. The ability to do so will allow a novel way to simulate and test this seminal phenomenon in physics, which has been tied to several Nobel Prizes.

Brooks' work in biophysics relates to modeling the replication of bacterial cells. She has created mathematical and computational models that accurately simulate and predict the behavior observed in the lab. In Summer 2020, Brooks earned a fellowship from Boston University's REU program, where she assisted a research group to investigate how collective behaviors emerge in groups of bacteria. Her work throughout the summer has led to a continued collaboration focused on how complexity arises in bacterial biofilms as a result of simple cellular interactions. Brooks is the recipient of multiple scholarships, holds a 4.0 GPA and is a scholar-athlete on the KU women's soccer team.

Brooks is the third award winner from KU, including Johns and 2011 winner Alison Koser.

Candidates for the award were recommended by their university president at the conclusion of a campus application and selection process that was open to all graduating seniors. Multiple selection criteria included outstanding academic scholarship, including prizes, honors and honorary societies; participation in extra/co-curricular activities; and a two-page essay by the nominee addressing how the university has prepared him or her for the next career step.