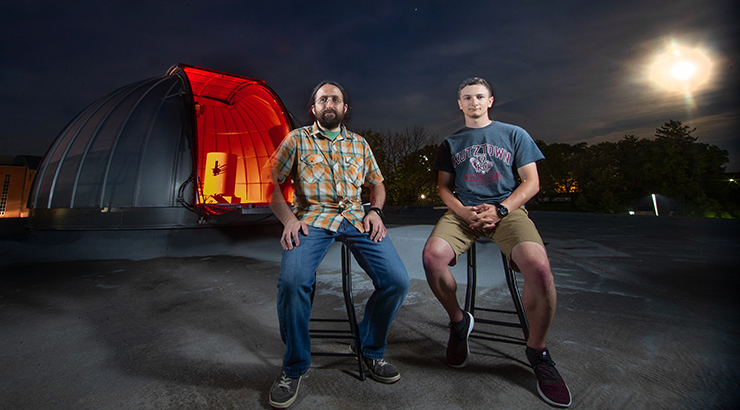 KUTZTOWN, Pa. - Kutztown University’s Observatory has discovered another exoplanet, KELT-23Ab. The discovery was featured in an article in the Astronomical Journal with KU student Daniel Johns, undergraduate physics and astronomy major, and his advisor Dr. Phill Reed, professor of Astronomy & Physics, serving as the lead authors. KU student Ryan Rauenzahn is also a contributing author.

The 0.6-meter on-campus research telescope at KU captured the exoplanet passing in front of a star on July 3, 2018, but more than a dozen other telescopes and 50 additional co-authors were involved in the discovery.

“Being the lead author of a large project like this really opened my eyes to the amount of work and collaboration that goes into discovering an exoplanet,” Johns said.

Reed and his fellow researchers at the Observatory are members of a follow-up observing network for the Kilodegree Extremely Little Telescope (KELT) exoplanet discovery project, which is owned and operated by Lehigh University, The Ohio State University and Vanderbilt University.

“KELT is a wonderful collaboration of exoplanetary scientists,” Reed said. “I am extremely grateful for the valuable opportunities they have afforded me and my students!”

The newly-discovered exoplanet orbits a star, KELT-23A, that is located 408 light-years from Earth and is nearly identical to our own Sun. The planet itself is a “hot Jupiter,” meaning that it is a giant, gaseous planet like our Jupiter; however, this exoplanet is slightly different than our Jupiter because it lies extremely close to its host star. At a mere 2.8 million miles from KELT-23A, KELT-23Ab completes a full orbit every 2.26 days. Using additional data from the European Space Agency’s Gaia spacecraft, the team determined that KELT-23A is actually a member of a wide binary star system.

The KELT-23A system orbits another star, KELT-23B, that is much smaller and cooler than the Sun. KELT-23A and KELT-23B lie about 600 astronomical units from each other, taking more than 10,000 years to complete a single orbit. This discovery is important because it contributes to currently developing models about how hot Jupiters are formed. Jupiter-like planets must form farther from their host stars, where temperatures are cooler, and then migrate inward toward the star. This inward migration may be occurring via interactions with a distant companion star. In the case of KELT-23Ab, the planet is still migrating in towards KELT-23A and will likely reach the star within the next billion years.

The position of the exoplanet is ideal for future observations by space-based telescopes. Due to its proximity to the constellation Ursa Minor, KELT-23Ab is near the continuous viewing zones of both NASA’s Transiting Exoplanet Survey Satellite (TESS) and the James Webb Space Telescope (JWST) space-based observatories. TESS, which will begin observing the northern sky later this year, has the precision to discover other planets in the KELT-23A system, and possibly even Earth-sized objects. JWST, which is expected to launch in 2021, will study the formation and evolution of galaxies, stars and planetary systems using infrared technology, which gives the JWST a better advantage at examining cool objects and makes KELT-23Ab a prime candidate for study.

For more information about the Observatory and KU’s participation in this exoplanet discovery, please contact Dr. Phill Reed at preed@kutztown.edu. To read the full paper, please visit https://iopscience.iop.org/article/10.3847/1538-3881/ab24c7.