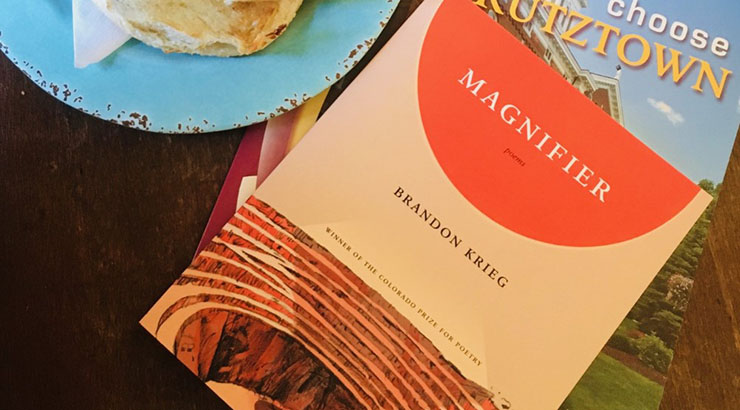 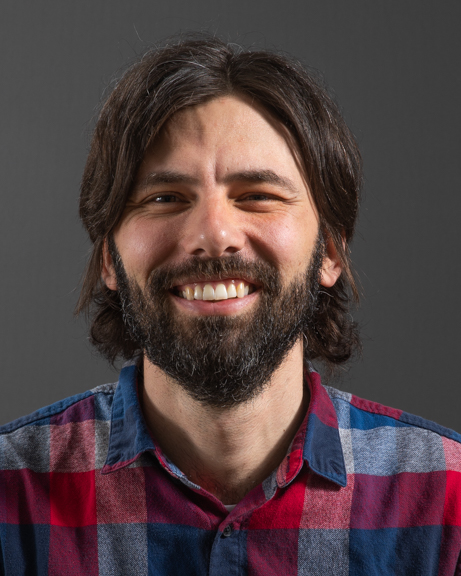 "I couldn’t believe I won the prize," Krieg said. "Many of the other poets who have won before, I’m familiar with and love their work, so it feels good to be included in that group."

Krieg’s two previous collections of poetry are a testament to an outstanding and continually improving body of work for the author. In the Gorge, published in 2017, won the Codhill Poetry Award. Invasives, published in 2014, received the New Rivers Press MVP Award. In addition, his poems have appeared in Conjunctions, The Iowa Review, Antioch Review and many other journals.

Krieg received his Bachelor of Arts from Cornell University followed by a Master of Fine Arts in creative writing from the University of Washington. He began collecting notes and writing the first group of poems included in Magnifier in the fall of 2011; at the same time, he began the work of earning his doctorate at Western Michigan University.

“I think that the poems I wrote in Kalamazoo are much more focused on direct observation," Krieg said. "The more recent poems leap a lot and are kind of all over the place and use all of the space on the page. My more recent poems are more ironic or even sarcastic at times. My earlier poems were more earnest, but they’re all similar in their way. You can’t not be yourself when you write."

After a 12-year stint carrying a collection of books to six new homes across the U.S., Krieg has settled in Kutztown, Pa., with his wife and son and is in his second year teaching at Kutztown University. Magnifier idles in moments of Krieg’s life, grounding him in the presence of physical spaces and sensory perceptions. Opening the collection with quotes from both Christopher Smart on spiritual magnification and Rachel Carson on biological magnifiers, the intermingling of the spiritual, scientific and spatial is an evident theme in the work.

“I’ve always been interested in the question of how to fully inhabit your life," Krieg said. "I examine how to be present in what’s around you and make meaning with your connections to the world. I write about the connections that are not just based on consumption, status or these ideas we’re sold about what is supposed to make us feel good. I’m interested in other meaningful ways of being in the world. A lot of that, for me, comes from just being outside, walking, hiking, biking and looking around, noticing things, noticing what people say to me and how I interact with them, noticing when I’m interested in something and trying to bring that into my work. Poetry is partly a method of being more attentive in my life.”

Krieg expresses warmth for his new home in Kutztown and enthusiasm about his students, the courses he teaches, his colleagues and the beauty of the KU campus. He is pleased that Magnifier can be found at Kutztown’s local bookstore, Firefly. Though his body of work is already impressive he seeks to continue bringing pride, confidence and insight to his students by continuing to write poems.

For just this moment, Krieg looks to the future rather than the present, eager for the next opportunity in both his teaching and writing, “by the time you publish a poem or a poetry collection, as lucky and fulfilling as that is, the excitement of discovery you experienced in the act of writing is already gone. Your work is there in print and that’s satisfying, but I’m always eager to get back to blank page and find out what’s next. That’s where all the fun is.”