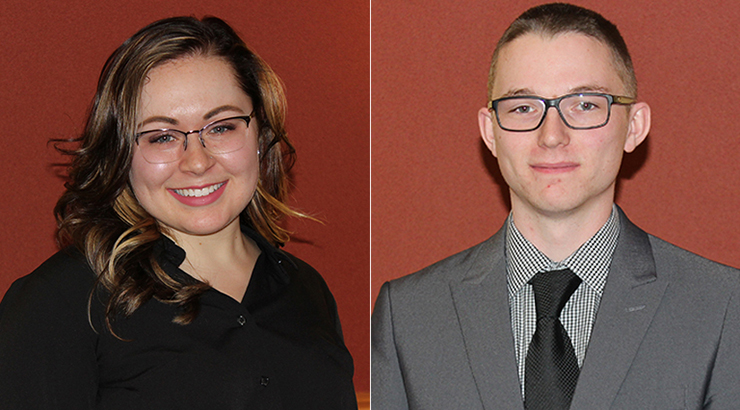 HARRISBURG, Pa. - Kutztown University students Aleska Gonzalez of Allentown, Pa., and Eric Schulden of Fredericksburg, Pa., have been selected for a 15-week internship program, sponsored by Pennsylvania's State System of Higher Education. Gonzalez is working for the Office of Public Engagement in the Office of Attorney General and Schulden is working for the state Department of Environmental Protection and Governor's Policy Office.

The two are part of 12 students participating in The Harrisburg Internship Semester (THIS) program, which provides students the opportunity to work in all areas of state government while earning a full semester's worth of credits. THIS invites students from each of the State System universities to participate. Students participating in the program also will attend several academic seminars during their spring semester internship. Each of the students will complete an individualized research project as part of the program's requirements.

Gonzalez is a senior public administration major, with minors in paralegal studies and political science. She is the daughter of Jeanette and Miguel Gonzalez and a 2013 graduate of William Allen High School.

Schulden is a senior political science and paralegal studies major, with a minor in international relations. He is the son of Anton and Susan Schulden and a 2015 graduate of Northern Lebanon High School.

More than 600 students from the State System universities have participated in THIS since the program began in 1989, each gaining valuable insight into the workings of state government at the policy-making level. Interns have worked with dozens of state agencies, as well as in the offices of the governor, the speaker of the House of Representatives and the attorney general.