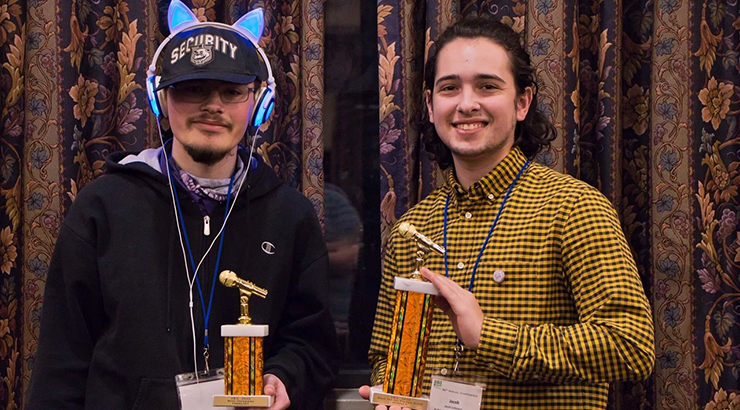 KUR personalities, Jakel and Bigfoot, brought back gold in Best On-Air Charity Radio Pledge Drive. The drive put the hosts head-to-head in a “charitable smackdown” for Oceana and the Leukemia-Lymphoma Society (LLS), respectively. KU raised more than $450 for the charities in just three hours, with the majority of donations going to LLS. Ian “Bigfoot” Ross chose LLS in memory of a family member who succumbed to the disease. Jacob “Jakel” Leibowitz accepted the award.

“This victory is not just for me; it is foremost for the charities we donated to, for KUR and for Kutztown University,” Leibowitz said.

KUR was awarded runner-up for Best Station Giveaway for its phone-wallet giveaway, as well as runner-up in Best Use of Sound Effects thanks to Elijah Guerrero’s KUR Mall Opener segment.

Last year, KUR was awarded seven runner-up awards, lauding use of multiple social media accounts as well as Best Specialty Music Show, Best Documentary and Best Radio Drama. KUR brought home the most trophies in organization history in 2018. In addition to bringing home gold this year, previous years have included Golden Microphone Awards for Best News Interview and Best Use of Social Media, creating a legacy of excellence for KUR.

Revived in 2005 from the remnants WRKU, KU’s longtime student radio station, KUR is staffed by more than 50 Kutztown University students. For schedules, shows and events, follow KUR1670 on Facebook and Instagram. To listen to KUR’s award-wining content, tune in by searching Kutztown University Radio on Spotify, at http://www.kutztown.edu/kur, via the TuneIn app or by radioing the 1670 AM frequency on campus.