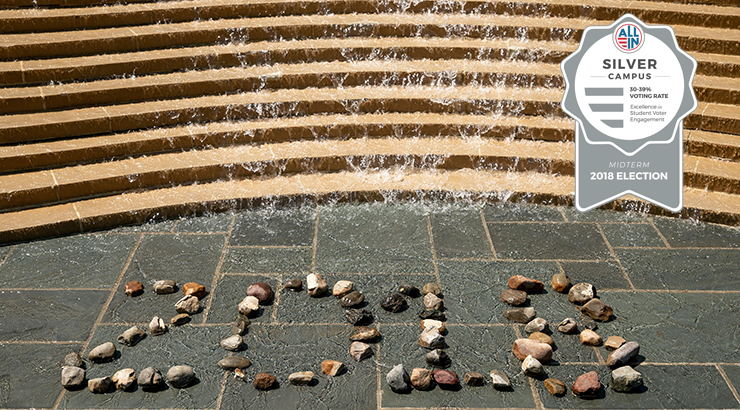 Student participation in elections has increased from the 2014 midterm election to the recent 2018 midterm election. According to the National Study of Learning, Voting and Engagement, an initiative of Tufts University’s Institute for Democracy & Higher Education, voter turnout at the more than 1,000 institutions participating in the study increased by 21 points from 19% to 40%. A report by the National Study of Learning, Voting showed 33.9% of KU students voted in the 2018 midterm elections, an increase of 23.9% from 2014. The increase reflects nearly 2,000 more KU students voting, from 865 in 2014 to 2,734 in 2018. 73.9% of KU students are registered voters.

“We are excited to honor Kutztown University with an ALL IN Challenge Silver Seal in recognition of their intentional efforts to increase democratic engagement and full voter participation,” said Jennifer Domagal-Goldman, executive director of the ALL IN Campus Democracy Challenge. “More institutions like KU are changing culture on campus by institutionalizing nonpartisan democratic engagement efforts that are resulting in the incredible student voter turnout rates that we’ve seen across the country.”

Leah Cassellia, senior director of Student Involvement and Student Union Operations, and Julia Laudadio, undergraduate student in KU’s social work program, will be representing Kutztown University at the ALL IN Challenge Awards Ceremony Tuesday, Nov. 12, at the Newseum in Washington, D.C. Laudadio is a Vote Everywhere Ambassador, a group which has been integral to the rise of student voting on campus. Vote Everywhere Ambassadors are funded through the Andrew Goodman Foundation. The ceremony in Washington, D.C. will honor all of the campuses who received ALL IN Challenge awards.

The ALL IN Campus Democracy Challenge is a nonpartisan, national initiative recognizing and supporting campuses as they work to increase nonpartisan democratic engagement and full student voter participation. The Challenge encourages higher education institutions to help students form the habits of active and informed citizenship and make democratic participation a core value on their campus.

More than 560 campuses, enrolling more than 6.2 million students, have joined the challenge since its launch in summer 2016.