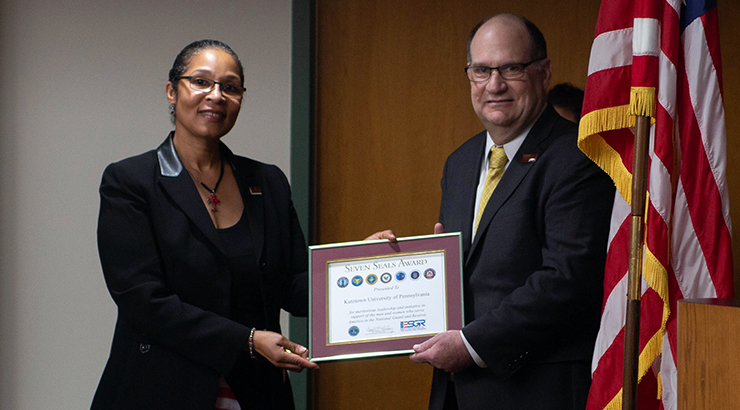 KUTZTOWN, Pa. – Kutztown University and Dr. Kenneth S. Hawkinson, university president, are the recipients of the Employer Support of the Guard and Reserve (ESGR) Seven Seals Award. Presented one of only 60 awards given to employers by the Pennsylvania Committee this year, the honor is a national level award for patriotic employers meant to recognize the consistent and outstanding support of KU employees who also serve in the Guard and Reserves.

The award was presented to Dr. Hawkinson at the Veterans Appreciation Luncheon during Veterans Appreciation week. T. Brown, coordinator of Kutztown University’s Office of Veterans Services, both presented the award and nominated Kutztown and Dr. Hawkinson for consideration. Brown has been an employee of the university since 2001 and has served both the university and the country during this time.

“I nominated Kutztown and Dr. Hawkinson for an employer award when I returned from active duty, for the great support and flexibility provided to me during my mobilization and when I returned,” Brown said.

Presented at the discretion of the state chair or by ESGR senior leadership, the Seven Seals Award is the broadest and most inclusive award given by the ESGR. It is granted in recognition of significant individual or organizational achievement, initiative or support that promotes and supports the ESGR mission to promote supportive work environments for U.S. National Guard and Reserve Service members.

ESGR, a Department of Defense program, was established in 1972 to promote cooperation and understanding between Reserve Component Service members and their civilian employers and to assist in the resolution of conflicts arising from an employee's military commitment. ESGR is supported by a network of more than 3,750 volunteers across U.S. states, districts, commonwealths and territories. ESGR develops and promotes supportive work environments for service members in the Reserve components through outreach, recognition and educational opportunities that increase awareness of applicable laws.