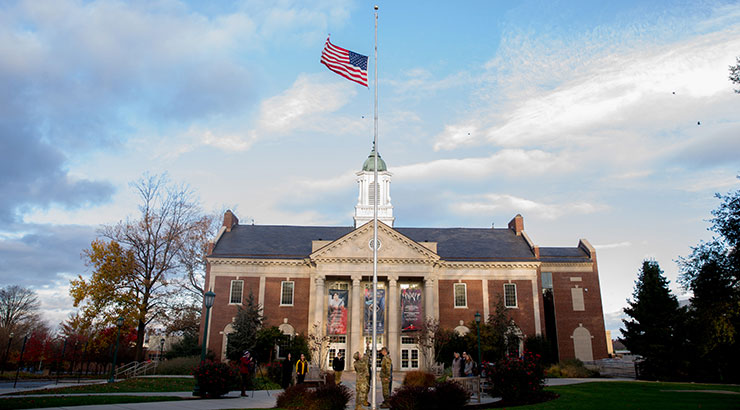 KUTZTOWN, Pa. – Veterans Day holds special meaning for the Kutztown University community. The university holds week-long events to honors those who serve and provides resources to military-affiliated students – all under the leadership of university president and veteran, Dr. Kenneth S. Hawkinson.

Hawkinson was in the U.S. Army for three years. After serving in the Illinois National Guard as a field artillery officer and executive officer for a field artillery battery, he was called to active duty as an infantry officer. He served in Germany as a platoon leader and a weapons platoon leader and as a public affairs officer. He also served for two years as a volunteer in the Peace Corps in Mali, West Africa.

The experiences from serving in the military and the Peace Corps have shaped Hawkinson into the person he is today. Comradery, sense of duty, humility and work ethic are traits he gained from his experiences and apply to his role as university president.

Growing up during the Vietnam War, Hawkinson recounts his older brother and uncle having served.

"I knew I wanted to go into the military because it gave me great sense of obligation and duty," Hawkinson said. "The military and ROTC also supported me with a scholarship which helped further my education."

Hawkinson has immense pride from his time serving. Every year on Veterans Day, the university holds an annual raising and lowering of the flag outside Schaeffer Auditorium – an event Hawkinson attends on an annual basis.

Serving in the military left a substantial impact on Hawkinson's life. He notes how direct experiences have impacted his day-to-day life as university president – "move forward from problems or issues in your life; continue on, but always remember to look back to make sure that issue is fixed (secured)."

Hawkinson works to support military-affiliated students at KU. Kutztown University ROTC, which caters to provide individuals with the tools, training and experiences they need to become Officers in the U.S. Army, is one of the many things put into place by the university to benefit military-affiliated students. The Office of Veterans Services supports programs for those who are involved in military services. The university assists students to receive federal benefits from the GI bill, which provides opportunities for service people to live 100% of capabilities.

Veterans Day is a national holiday for all Americans, not just those who have served. Hawkinson leaves the KU community with ways people can show their support.

"Whenever someone encounters a veteran, thank them for their service," Hawkinson said. "These are people who put their lives at risk even from a young age. To do this shows tremendous humility."