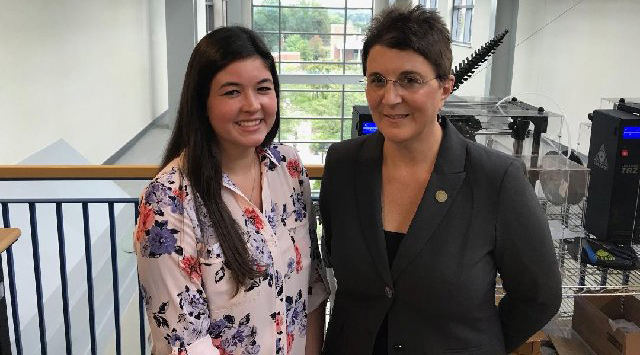 KUTZTOWN, Pa. - Morganne Bennett, an education of the visually impaired major in her junior year at Kutztown University, is spending her spare time in the lab this semester.

Bennett, of Hillsborough, N.J., is working with Dr. Paul V. Quinn, associate professor of physics, to create physics labs for the visually impaired. To do so, Bennett and Quinn are focusing their research on making the labs more tactile to appeal to the senses other than vision.

Their research was bolstered by a grant from Dr. Jolynn Haney '84 M'93, a member of KU's Council of Trustees since 2016, who is currently serving as secretary.

"This means a lot to me because I hope to teach students who are visually impaired; but since every student is different, we have to work on making general improvements in the lab to make it more tactile," Bennett said. "Dr. Haney's contribution will allow me to focus on improving KU's resources for students who are visually impaired so that labs will truly appeal to all students on campus."

The grant will support Bennett with funding to continue her research.

Bennett and Quinn are taking five pre-existing physics labs and making them tactile by creating a board with three functions that is tailored to the needs of students who are visually impaired. The first function is a magnetic graphing tool that will take the place of Microsoft Excel. The second function includes a series of pegs and holes that will allow students to plot data, and the third function consists of felt and velcro that can be used to create maps.

"It's important that every student has the same opportunities. Labs friendly to students who are visually impaired will not only benefit them, but it will also help professors better understand student needs," Bennett said. "Having a lab specifically designed for this will give professors better ideas of how to help students in the future, especially since we have many students who are visually impaired at KU."

To learn more on physics at KU, check out their department website or contact the physical sciences department at simpson@kutztown.edu or by phone at 610-683-4447.