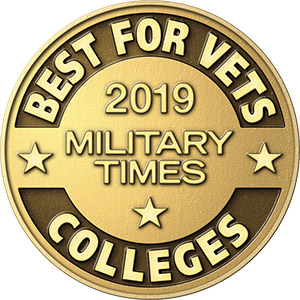 KUTZTOWN, Pa. - Military Times unveiled Monday afternoon that Kutztown University is part of its Best for Vets: Colleges 2019 rankings. KU was ranked 75th among four-year schools, the university's fifth-straight year in the rankings and its highest ranking in school history.

Kutztown was 1-of-208 schools listed in the ninth annual rankings and 1-of-2 in the Pennsylvania State System of Higher Education (Edinboro, 126th). KU improved from its rank of 104th in last year's rankings.

Rankings are based on the results of Military Times' annual survey - the most comprehensive school-by-school assessment of veteran and military student services and rates of academic achievement - as well as a detailed review of public data collected by federal agencies.

As is true for all Military Times rankings, Best for Vets: Colleges is an editorially independent, objective and rigorous news project. This feature evaluates the many factors that help make colleges and universities a good fit for service members, military veterans and their families. About 500 colleges took part in this year's survey.

"Military Times' Best for Vets designation is trusted throughout the veteran community as the mark of excellence for schools and other organizations that work with veterans, service members and military families. It can't be bought with advertising dollars - unlike some other supposedly veteran-friendly rankings - only earned through a record of steadfast service and dedication to those who have served," said George Altman, the Military Times editor in charge of the rankings.

"Fewer than half of the roughly 500 colleges and universities that competed for the recognition earned the right to call themselves Best for Vets in 2019. Their efforts should be commended."