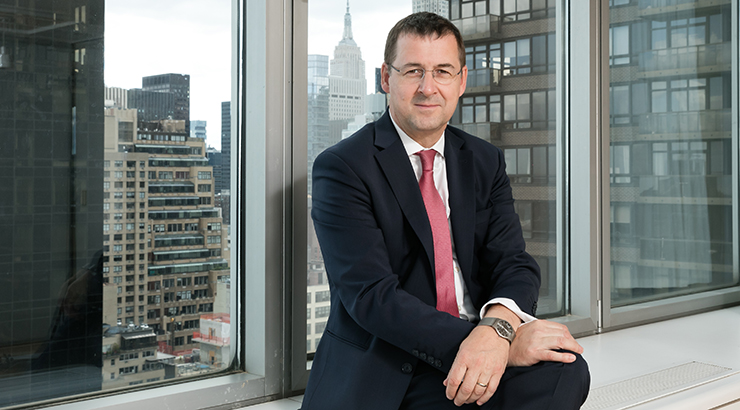 See video of the visit.

Born in 1966, Mr. Gill grew up in a protestant minister’s family in Herrnhut, Saxony, in former East Germany. He was initially denied a higher education by the communist regime and instead trained and worked as a plumber. After joining a preparatory protestant school and later the theological seminary of the Protestant Church in Berlin-Brandenburg, he went on to study law in Berlin and Philadelphia. Mr. Gill witnessed the fall of the Berlin wall and participated in the peaceful revolution which facilitated the reunification of east and west Germany.

For 30 years, the Berlin Wall was the symbol of the division of Germany and the world. Mr. Gill’s presentation highlights the struggle behind the fall of the wall. Liberation didn’t come from a single event, but from the citizens living under the rule of the German Democratic Republic and working to break the strict control through peaceful revolution. Without this revolution, neither the fall of the Berlin Wall nor the reunification of Germany would have been possible. Studying and discussing this historic era that changed Germany, Europe and the world is continually relevant. The Peaceful Revolution and the fall of the wall show what civil courage and standing up for one’s rights and freedoms can do.

After reunification, Mr. Gill continued to serve in political offices in Germany for the benefit of all German people. He extended his reach of fostering successful discussions and exchanging of ideas between Germany and the U.S. in August 2017, when he took on the role of German consul general in New York. He is responsible for consular and legal assistance for U.S. and German citizens within Pennsylvania, New York, New Jersey, Connecticut and the Bahamas.

Many of the stories Mr. Gill will discuss during his presentation have been preserved as part of an oral history project at the Goethe Institute. The Goethe Institute is the Federal Republic of Germany’s cultural institute, promoting the study of Germany abroad and encouraging international cultural exchange with multiple locations in major U.S. cities and worldwide.