A Crystal Clear Choice: Alumna's Experience at KU Leads to Dream Job in a Copper Mine

At an early age, Alex Racosky ’15 was rock solid about wanting a future in geology, and Kutztown University helped her unearth the confidence to lead more than a mile below the surface.

Today, Racosky is a mining geologist with Resolution Copper, a proposed copper mine
near Phoenix, Ariz., that could meet nearly 25 percent of the United States’ copper demand.

Racosky grew up in Bethlehem, Pa., and wanted a college experience close to home. She wanted to be near family in her early adult years, and meeting KU’s geology department faculty helped solidify her decision.

“I was able to ask questions and it made me feel like it was home – that if I were to attend Kutztown, I wouldn’t just be a number,” Racosky said. “It would be more like a family, and they would be available for me if I needed help.” 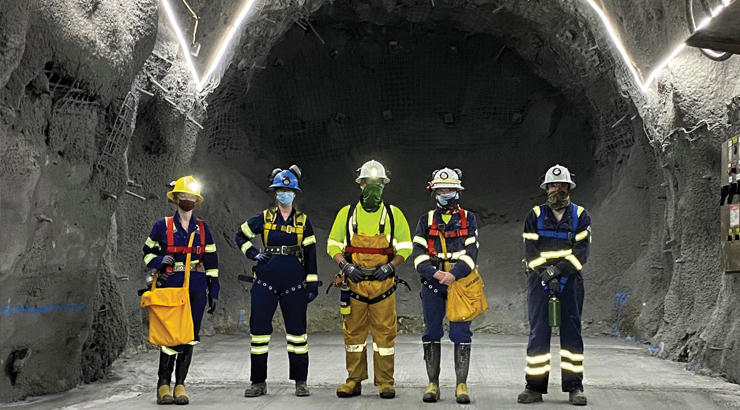 The range of geology courses exposed Racosky to several career paths, and graduate school was part of her plans as well. As a strong academic performer, Racosky had the opportunity to pursue scientific research with Dr. Kurt Friehauf, professor of physical sciences, who sparked her interest in economic geology.

“Alex succeeded at Kutztown University and in her professional life because she has the audacious wisdom to believe she can learn and do new things, and because she’s taught herself to advocate for herself in an amicable and assertively firm way,” Friehauf says. “She thinks about what she wants to achieve, and then applies herself wholeheartedly toward making those things happen. She’s quite an inspiration.”

Racosky’s research tested rocks from Namibia to see if they held clues for a possible copper deposit in that area. She joined Friehauf on a visit to the University of Arizona to test the rocks on state-of-the-art instruments. In their travels, they passed the copper mine where Friehauf did his doctoral dissertation. That mine had since been depleted, but there was speculation about
another deposit about a mile or more down.

“I turned to him and said, ‘That sounds really interesting. I want to be a part of that project!’’’

As it turns out, that project is Racosky’s present-day employer, Resolution Copper.

Racosky’s research at KU culminated in a presentation for the Geological Society of America in Vancouver, Canada. She said the experience was a major step on the road to graduate school, and it helped give her the courage to leave everything familiar behind to succeed on her own in Colorado, and later Arizona.

“I have always been a really shy person,” Racosky said. “I don’t think Alex 10 years ago would have ever thought I’d be doing something like what I’m doing today. That’s how shy I was.”

WORKING MORE THAN A MILE UNDERGROUND

She began working above ground but, about two years ago, an exciting opportunity took her more than a mile below the surface, where she worked with an underground team deepening one of the mine’s vertical shafts.

“It’s like a circle that’s 20 feet in diameter,” Racosky said. “You’re just in this cylinder and you can’t go deeper, and once your ride (elevator) goes back up, you have nowhere to go.”

Racosky scanned the rock face with a 3D laser scanner for analysis, mapped the geology, and sent reports to help engineers sink the shaft safely.

“If there was a weak fault or something, they needed to know that it was there,” Racosky said.

Another underground project involved Racosky working with the drilling team 10 hours a day while they drilled from the deepest part of the mine to investigate layers just above. She helped manage roughneck drillers and observed core samples fresh from the drill, all while trying to stay cool.

“I think a lot of people don’t understand that once you go below a certain depth in the Earth, it actually gets hotter,” Racosky said.

“The water at 6,000 feet underground is about 180 degrees Fahrenheit. So, it’s hot down there and they have to pump cool air down or you would basically cook alive.”

But Racosky can take the heat because she loves being a mining geologist. Led by curiosity and confidence, the KU alumna still seizes every opportunity to ask questions, and with mining perspectives high and low, she aspires to one day manage a team of her own.

This article appeared in the 2022 Tower Magazine