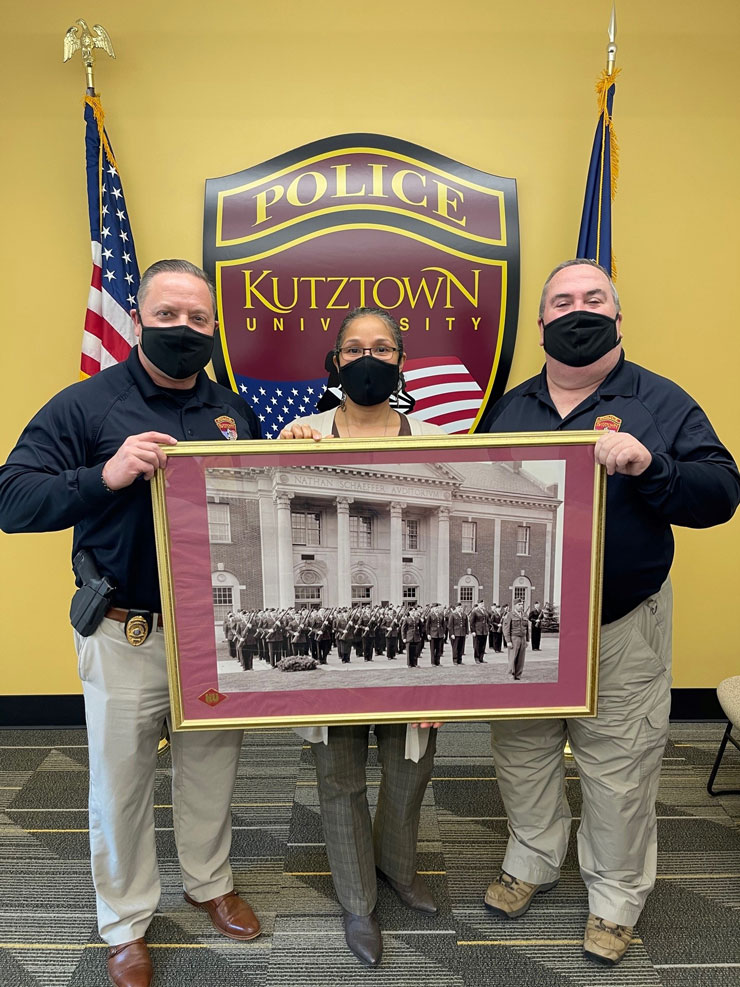 The photo is actually from World War II when KU and Old Main were a part of training. The soldiers were part of the Army Air Corp. About 10 years ago I had the privilege to meet and share an afternoon with one of the people who came to KU as part of the war effort. He was from Arkansas and had come back to KU with his wife, it was one of those days you were blessed to be at KU and to have the opportunity to talk with him.

The Story Behind the Photo

There are two known copies of this framed photo, Lehigh University Steel Battalion has one and the Kutztown University Office of Veterans Services has the other.  It’s unknown how the Steel Battalion acquired theirs but I was fortunate enough to be gifted ours.

I met with our dear friend KU Campus Police Chief Dillon before the start of this Fall semester to receive this photo and delight in how the photo came to be in the possession of the campus police.  One day sometime between 1998-99 and elderly Kutztown University (KU) Alumnus from Arkansas and his wife showed up at former KU president, Dr. McFarland’s office.  He loved KU, the people, and the community support during World War II so much that he always talked about them.  After speaking to his wife about KU for over 40 years he wanted to bring her to see the campus.  Chief Dillon wasn’t able to recall the alumnus’ name so we will refer to as The Gentleman.

The Gentleman completed 2 years of college, was inducted into the Army, and placed into the Army Air Corps.  He enrolled into Kutztown State Teachers College to complete his degree and finish his pilot’s training.  Pilots, navigators, and bombardiers used the Kutztown Airport for training, and planes in the Reading Airport flew bombers.  The Gentleman’s final flight training was when he went to Europe and flew bombers over France and Germany for D Day.  After the war he went back to Arkansas to start a life and family.

The Gentlemen reminisced about the campus and Main Street.  The campus consisted of Old Main, Schaeffer, Rohrbach Library (currently the Graduate Center), the President’s House, the Poplar House, Risley Hall, and the football field which was behind Risley.  The flag was raised and lowered in front of Schaeffer, as the Military Club does today during Veteran’s Day.  The Soldiers lived in A Wing of Old Main and each floor had Military Police assigned.  Soldiers weren’t allowed to leave without a pass.  The first floor was dedicated to classroom space and the Armory was located where the Social Equity office currently exists.  The Gentleman thought Main Street had changed very little as far as the buildings were concerned, stores were different, but structural bones were intact.

When Chief Dillon showed the Gentleman the photo, he immediately recognized the event and pointed out 3 or 4 different Soldiers who were part of the training.  He started to tear up and recounted the sacrifices made by so many to support the war effort.  College was required and aeronautics and higher level classes were needed to fly planes.  Colleges and universities repurposed themselves to help win the war.

The event in the photo was later described in the book, Kutztown University, The Campus History Series by Emily E. Billing and Kayla L. Fusselman) as

On December 7, 1942, the Kutztown State Teachers College community gathered for a service to commemorate the one-year anniversary of the bombing of Pearl Harbor. The theme of the ceremony was “Work-Fight-Sacrifice.”

This photo had several owners throughout the years, the Business Office found the photo and asked law enforcement to take ownership because of the paramilitary connection. After the KU Campus Police Headquarters was redesigned, Chief Dillon generously gifted the photo to Veterans Services because he believed it belonged with us and our new military and veteran population.  Dillon wanted the students who wonder if they belong at KU to realize that not only do they belong, but they have always been here. The photo proudly hangs on the second floor of the McFarland Student Union between the Army ROTC and Veterans Services offices for all who pass by to see and know that military service is an integral part of Kutztown University’s rich history.

Chief Dillon remarked that the afternoon spent touring the campus and listening to The Gentleman was incredible.  We appreciate Chief Dillon’s generosity and are grateful for The Gentleman’s sacrifice and service to our great Nation.