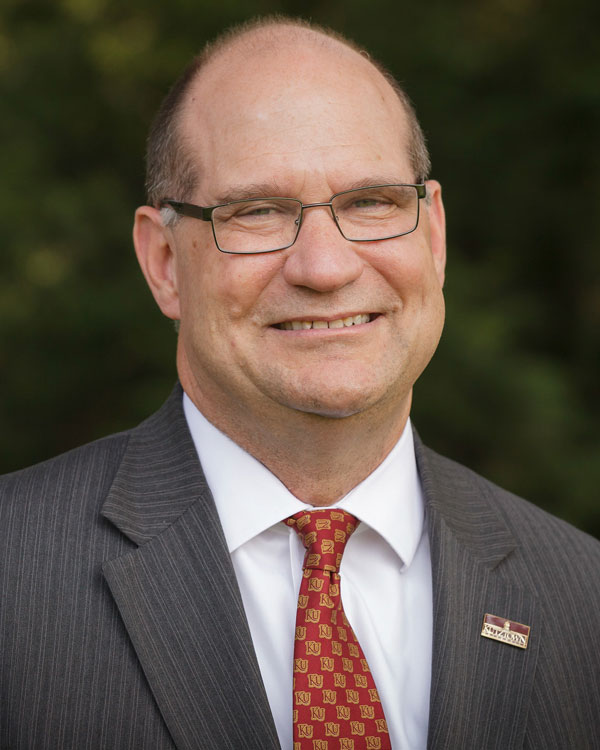 Dr. Kenneth S. Hawkinson began his tenure as the 12th president of Kutztown University on July 1, 2015.

Since his arrival at KU, Hawkinson has established 53 initiatives for the institution focusing on areas such as academic excellence, enrollment management student success, and expanding educational opportunity and access.   Accomplishments since his arrival include the completion of a new strategic plan for the university, a new marketing plan or "branding" of the university, an increase in academic standards and an increase in the academic profile of its students, the establishment of numerous advisory committees to enhance his commitment to shared governance, and a significant increase in fundraising. Hawkinson's community outreach efforts have included the establishment of "Walks with Wynnie," weekly campus walks featuring the ' family dog.

Before coming to KU, Hawkinson was provost and academic vice president at Western Illinois University from 2012-15. Prior to assuming his position as provost, Hawkinson served Western Illinois for four years as associate provost and associate vice president for budget, planning personnel. Previously, he was associate dean of the College of Fine Arts and Communication and chair of the Department of Communication.

Hawkinson began his academic career at Western Illinois as an assistant professor of and later was promoted to associate, then full professor. He also was an adjunct professor in African American Studies and an instructor in the Honors Program. During his time on the faculty, he served as leader of both the Faculty Senate and the faculty union. He has published numerous articles and dozens of professional papers. His research interests and creative pursuits include storytelling, oral tradition performance of literature.

Hawkinson earned his bachelor's degree in history from Western Illinois University. He also has a Master of Arts in speech communication from the institution and holds a doctorate in speech communication/performance studies from Southern Illinois University. He was a Fulbright Scholar from 1990-91, during which he taught American studies at the University of Ouagadougou, Burkina Faso, West Africa, and conducted research in African folklore and oral tradition.

Hawkinson was in the U.S. Army for three years. After serving in the Illinois National Guard as a field artillery officer and executive officer for a field artillery battery, he was called to active duty as an infantry officer. He served in Germany as a platoon leader and a weapons platoon leader, and as a public affairs officer. He also served for two years as a volunteer in the Peace Corps in Mali, West Africa.

A native of Carpentersville, Ill., Hawkinson is married to the former Ann Marie Hayes.  His son, Jivan Deglise-Favre-Hawkinson, recently completed his doctoral studies in engineering at the University of Michigan.