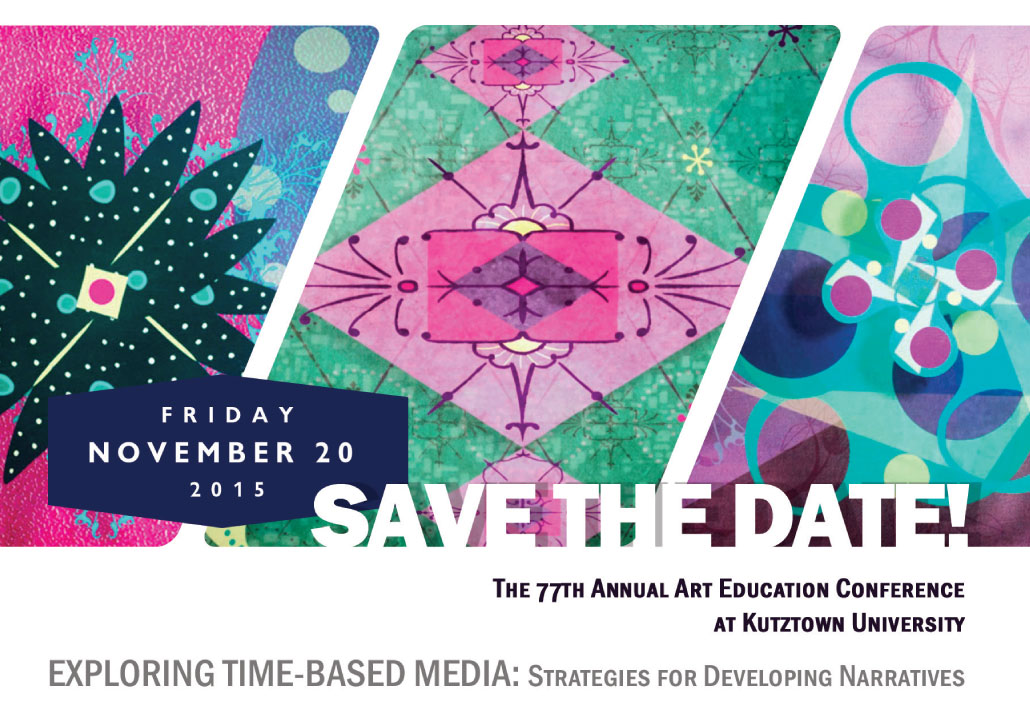 Welcome to the 77th Art Education Conference at Kutztown University. The purpose of this year’s conference is to develop a dialogue furthering the creative ways of exploring narrative in the classroom. Join us for an exciting day of presentations and workshops by international, national, and regional artists, educators and scholars working in time-based media.

The keynote speaker, Joanna Priestley, is a distinguished artist based in Oregon whose work (animations) has won awards in film festivals all over the world. She has had retrospectives at the Museum of Modern Art in NY, REDAT and American Cinematheque in Los Angeles, the Center for Contemporary Art in Warsaw, Poland, the Walker Art Center in Minneapolis, and the High Museum in Atlanta as well as shown on PBS and the BBC.

A guest speaker at the conference will be Camilla Rockwell, a documentary filmmaker, director, and producer based in Vermont. She has produced films on creativity and the arts, healing, and well-being, aging and dying, and the role of nature in children’s health and development.

Conference presenters include K-12 art teachers, university professors and artists who are eager to share what they or their students are doing creatively with technology as they explore themes, issues, concepts and ideas. Paramount in each conference presentation and session is the emphasis on the narrative through the use of time-based media. In what ways can we construct narratives and what stories are we telling? How can we prepare for 21st-century arts engagement that uses technology as a means for art-making and creative expression? What pedagogical strategies can we advocate or employ when using time-based media?

The conference presentations, sessions, and workshops will provide the opportunity for K-12 teachers, academics, researchers, artists, designers and students to exchange ideas and participate in a day-long engagement with the arts. 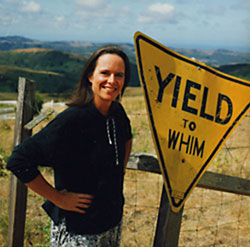 "The exquisite animated world of Joanna Priestley has been one of the best-kept secrets of the toon community. Whether she’s exploring our common fears and phobias, observing the vicissitudes of modern romance or commenting on turning 40, her many styles and visions are undeniably original and hard to forget."

Retrospectives of Priestley's films have been shown on PBS (USA) and the BBC (UK) and at the Museum of Modern Art (New York), REDAT (Los Angeles), American Cinematheque (Los Angeles, CA), Center for Contemporary Art (Warsaw, Poland), Stuttgart International Animation Festival (Germany), Walker Art Center (Minneapolis, MN) and High Museum of Art (Atlanta, GA). She has received fellowships from Creative Capital, National Endowment for the Arts, MacDowell Colony (Elodie Osborn Fellow), American Film Institute, Djerassi Foundation (Rothenberg Award) and the Fundación Valparaíso in Spain and was recently awarded the Media Arts Fellowship from the Regional Arts and Culture Council. Her films are in the permanent collection of the Museum of Modern Art in New York City. Priestley studied painting and printmaking at Rhode Island School of Design and at UC Berkeley, where she received a Bachelor of Arts Degree with Honors. She also attended California Institute of the Arts where she received an MFA Degree and the Louis B. Mayer Award. Her background includes Coordinator of the Northwest Film and Video Festival, Director of Strictly Cinema, Editor of "The Animator", Regional Coordinator of the Northwest Film Center, Co-Director and Co-Founder of FILMA: Women's Film Forum and founding President of ASIFA Northwest.

Priestley teaches animation workshops worldwide and she has run an apprenticeship program at her studio in Portland Oregon. She is a member of the Academy of Motion Picture Arts and Sciences and she serves on numerous juries and selection committees, including Stuttgart International Animation Festival, Nichold Screenplay Fellowship, Canadian International Animation Festival, Texas Filmmakers Production Fund, Big Muddy Film Festival and the Annie Awards. Priestley also loves medicinal herbalism, gardening and Burning Man. Her films can be seen on her website: www.primopix.com. 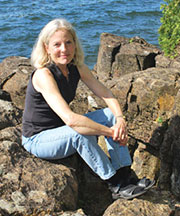 Camilla Rockwell began in ﬁlm with ﬁlmmaker Ken Burns, working on nine of his PBS programs and series from The Shakers: Hand to Work, Hearts to God (1983) to Thomas Jefferson (co-producer, 1997). In 1999, she established Fuzzy Slippers Productions to produce ﬁlms on creativity and the arts, healing, and well-being, including segments for the PBS series Body and Soul; Pioneers of Hospice, an award-winning educational program about the founders of the modern hospice movement; a video masterclass series for world-renowned artist Richard Schmid; and Stone Rising, a one-hour feature about master stone artisan Dan Snow (PBS). Rockwell’s 2007 ﬁlm, Holding Our Own (PBS) helped to expand our national conversation about aging and dying.

Rockwell’s film, Mother Nature’s Child, calls us to consider the future of that which we hold most dear: the health and well-being of our children. Visually rich, inflected with humor and the unexpected, the film examines the benefits of unstructured outdoor play, risk-taking, urban connection with nature, healthy rites of passage, the use of technology, and what it means to educate the “whole child”. The film has stirred intense discussion among parents, teachers and health professions nationwide.

Join us for a Special Pre-Conference Event: 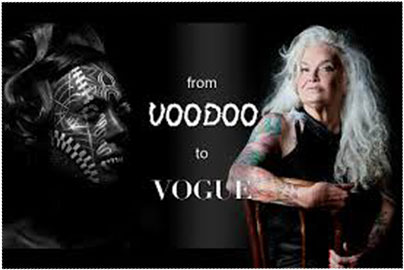 Tattoo artist Shanghai Kate presents, From Voodoo to Vogue, a global history of women and tattoos. Also known as the Godmother of Tattoos, Kate Hellenbrand has been a tattoo artist since 1972. Kate is also an author, lecturer and her award-winning work has appeared in all major tattoo magazines. In 1971, Kate co-produced the exhibition TATTOO at the Museum of American Folk Art in New York. Thursday, November 19, 2015 from 11:00 - 12:30 in Schaeffer Auditorium

Film Mother Nature’s Child by Camilla Rockwell, documentary filmmaker (57 minutes). This film explores nature’s powerful role in children’s health and development through the experience of toddlers, children in middle childhood and adolescence. The film marks a moment in time when a living generation can still recall childhoods of free play outdoors; this will not be true for most children growing up today. The effects of “nature deficit disorder” are now being noted across the country in epidemics of child obesity, attention disorders, and depression.

Mother Nature’s Child asks the questions: Why do children need unstructured time outside? What is the place of risk-taking in healthy child development? How is play a form of learning? Why are teachers resistant to taking students outside? How can city kids connect with nature? What does it mean to educate the ‘whole’ child?

Film Misa’s Fugue—The tapestry of tragedy and artistry in the life of Frank Grunwald is interwoven with his story are teenage painters, sculptors, musicians, and filmmakers from Fleetwood Area High School who collaborated with their teachers to create a documentary that attempts to embellish the creative spirit amidst the most destructive moment in human history.

Poignantly told through film and interviews with Frank Grunwald, the documentary was edited, musically scored and visually supported by the efforts of students and faculty of Fleetwood Area High School.

Frank (Misa) Grunwald was born in Czechoslovakia in September of 1932. Four months later, Adolf Hitler became Chancellor of Germany. Misa's Fugue is the true story of one boy's journey through Prague, Terezin, Auschwitz, Mauthausen, Melk, and Gunskirchen as a victim of arbitrary Nazi oppression. While exposed to some of the most horrific people, places, and events of the Holocaust, Frank Grunwald was able to endure the atrocities of genocide through a love for art and music that his childhood in Prague had instilled in him. His story of suffering, loss, and self-discovery is poignantly told from the perspective of a child who has lived with these tragic memories for more than half of a century. Encountering the notorious Dr. Josef Mengele and legendary artist Dina Babbit along the way, Frank Grunwald's life demonstrates the decision that all men and women must make to devote their lives either to the creation or destruction of human civilization.

This video explores the body as a means of expression through a documentary on the art of tattoos, piercing and body adornments with a focus on women and tattoos. The design of the documentary includes a series of interviews with tattoo artists and people with tattoos addressing their involvement in the world of tattooing and recorded in various settings, including private one-on-one, a semi-public tattoo studio, and a fully public tattoo convention. Multiple perspectives of tattooing are explored through the issues of health, aesthetics, professional training, drawing skills, tools and equipment, imagery, text, and age. The interviews reveal perspectives on the history of tattooing and construct understandings of why humans adorn their bodies, reasons for images and placement. Tattoo imagery includes varied styles such as old school, black and gray, tribal, photorealism, Asian, Polynesian and contemporary.

Video Art and the Upper Schuylkill River, by Marisa Marlowe

This documentary delves into the rich culture of art that is found in the Upper Schuylkill River region. Through the narratives of four artists, the history and breadth of the area’s artistic identity are explored. These artists give us a glimpse into a range of topics, from the hardships and pride of the once-booming coal mining industry, to how the natural geography of the landscape informs the rock and roll being create by contemporary musicians. We see how the river weaves through and connects past to present, just as it weaves through and connects the small mountain towns that find themselves along her meandering journey.

curated by Josh Miller and Summer Doll, faculty members in the Department of Communication Design at KU.