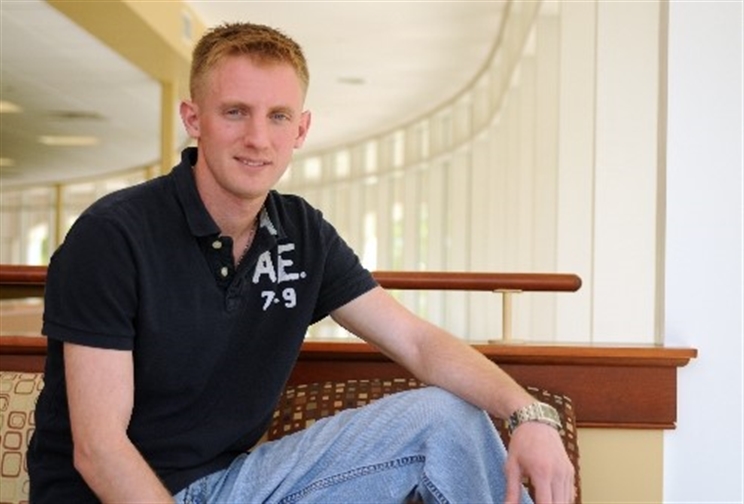 Forty days before he was scheduled to come home from Iraq, Marine Sgt. Jonathan E. Tompkins went to check out a roadside bomb while on patrol near Fallujah.  The device was a dud, and Tompkins returned to his Humvee.  As he reached to open the door, a sharp pain stung the pit of his right arm.  It felt like an electric shock, but Tompkins would quickly realize the pain was inflicted by a sniper's bullet.  It was April 5, 2007, and in an instant Tompkins had become a wounded warrior. Three years and 40 surgeries later, the 27-year-old is studying at Kutztown University to become a high school science teacher.  As he adjusts from military to civilian life, Tompkins is assisted by the Wounded Warrior Project, a Florida-based nonprofit that helps with medical expenses and organizes activities to support wounded veterans.  On Sunday, Tompkins will give something back to the Wounded Warrior Project when he officiates at a 5-kilometer run at Alvernia University.  "Anytime I need support, they're there to help me," said Tompkins of Maxatawny Township. "I want to do whatever I can to help."

Fighting to Live
Despite the wound under his arm, Tompkins managed to climb inside the Humvee. Gasping for air, he sent out a plea for help on the vehicle's radio.  "I'm hit," he said, coughing blood. "I'm hit."  "How bad?" came the reply from the crew of a MedEvac helicopter hovering in the distance.  Tompkins had not yet unzipped his protective body armor vest. When he did, blood flowed from the wound.  The bullet had ripped through both lungs and zigzagged through internal organs, venting on Tompkins' right side a few inches above the belt line.  A Navy corpsman in a nearby Humvee heard Tompkins' call for help and rushed his aid.  The medic, known to Tompkins only as "Doc" Ferrer, pulled him from the Humvee. There, in the sands of Iraq, he performed battlefield surgery that saved the wounded soldier's life.  The bullet had shattered Tompkins' right rib cage, and every time he took a breath, fragments punctured his lung.  Without an anesthetic, Ferrer stuck his hand inside Tompkins' chest and pulled out the fragmented ribs, preventing them from further damaging his lung.  As Tompkins fought for his life, a firefight raged around him. Fellow Marines encircled him with Humvees for protection.  Ironically, one of Tompkins' duties was to call in a MedEvac when a fellow Marine was wounded. With access to radio transmissions, he heard the MedEvac pilot radio, "Too hot LZ (landing zone). Can't land."  Two Cobra attack copters, however, provided cover for the MedEvac to land and get Tompkins out about 40 minutes after he'd been hit.  "I was coherent for most of it," he recalls."  Toward the end, I flat-lined, but I was revived in the helicopter."

Treatment and Recovery
Tompkins was flown to a hospital in Fallujah, then transferred to others in Iraq and Germany. Four days after he was wounded, he arrived at the National Naval Medical Center, Bethesda, MD.  Over eight months, he underwent 40 surgeries.  He has little memory of the 90 days he spent in a medically induced coma.  Occasionally, doctors brought him out of the coma to update him on his condition.  Surgeons removed his gall bladder, 70 percent of his liver and part of his stomach and intestines.  They replaced his ribs with an artificial material. In rehabilitation, he would have to learn to walk again.

No Regrets
Despite the ordeal, Tompkins has no regrets about joining the Marines, serving in Iraq or America's commitment to fighting terrorism.  "People ask me do I regret it. And I say, 'No, we're doing the right thing,' " said Tompkins, who's originally from Pennsburg, Montgomery County. "In many situations, if we were not there, women and children would have been raped or killed."  Tompkins understands he'll always bear the scars of war, physical and emotional.  His plans for a law enforcement career, for example, have been all but eliminated by his injuries. He suffers migraine headaches and has post-traumatic stress disorder.  Yet, Tompkins approaches the future with optimism.  He's looking forward to getting his college degree, and he's buying a house.  His military experience, he insists, has made him a better person.  "I have a better outlook on life," he said. "Things mean a lot more to me now."