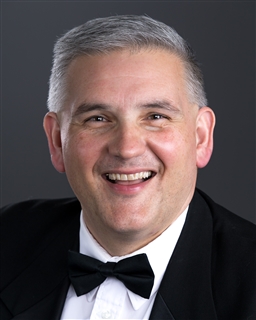 Prior to teaching at KU, Dr. Neuenschwander served as a Visiting Lecturer in Music with the University of Illinois Bands, where he served as Assistant to the Director of Bands under James F. Keene, as well as Assistant Director of the Marching Illini. Prior to his time in Illinois, he served as the band director at Canfield High School in Canfield, OH. While in Canfield, he was responsible for two concert bands, two jazz ensembles, marching band, teaching music theory, music history, and assisting with the bands at Canfield Village Middle School. During his tenure at Canfield High School, the CHS Symphonic Band was invited to perform at several music conferences, including as featured performer for the 2001 Ohio Music Educators Association (OMEA) State Conference in Columbus, OH. As a member of OMEA, he served as Chair of the District V Honors Project and President-Elect of OMEA State District V.

Dr. Neuenschwander earned a B.S. in Instrumental Music Education at the University of Wisconsin-Madison, his M.M. in Trombone Performance at the University of Akron, and recently earned his Ed. D. in Music Education from the University of Illinois at Urbana-Champaign. He has studied trombone with Elliot Chasanov, Edward Zadrozny, William Richardson, James Wheat, and bass trombone with Kiel Lauer. As a performer, he is a member of the trombone section in the famed Allentown Band, America's Oldest Civilian Concert Band. Additionally, he has been a member of the Richmond (IN) Symphony, the West Virginia (Charleston) Symphony, The University of Illinois Wind Symphony, The Concert Band of Central Illinois, as well as having played with regional orchestras in Northeast Ohio and Northeast Pennsylvania.