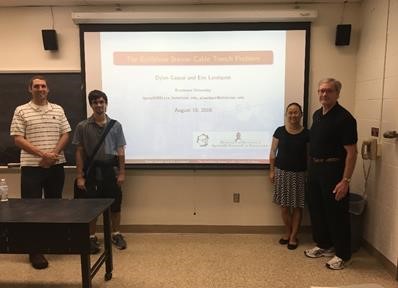 Dr. Lu and Dr. Vasko jointly presented two papers.  The first paper entitled "An Empirical Study of Population-Based Metaheuristics for the Multiple-Choice Multidimensional Knapsack Problem" was joint work with Mr. Kenneth Zyma when he was a computer science Graduate Assistant working under the direction of Dr. Vasko and Dr. Lu. The second paper was entitled "What is the Best Continuous Metaheuristic to Solve the Set Covering Problem?"  Also, Dr. Vasko and Dr. Lu were organizers and session chairs for two sessions on metaheuristics.

The goal of the MOPTA conference is to present new developments from different areas of optimization.  Because this conference has been held annually at Lehigh University in Bethlehem, Pa., since 2009, one might perceive this to be a local conference. However, nothing could be further from the truth! This is a highly international in scope conference with world renowned speakers and attendees. This year in addition to speakers from prestigious academic institutions in the USA such as Carnegie Mellon, Cornell, Johns Hopkins, MIT, Princeton, and Stanford, there were speakers from Belgium, Canada, Chile, Colombia, the Czech Republic, India, Lebanon, The Netherlands, Oman, Scotland, and Taiwan.

This past spring semester, Nathan Betts '16 was searching the web for articles dealing with the assignment problem for his senior seminar project.  He found the article "A New Approach of Solving Single Objective Unbalanced Assignment Problem" by Yadaiah and Haragopal published in the peer-reviewed American Journal of Operations Research (AJOR), 2016, 6, 81-89.   He was suspicious of the approach discussed in the paper and brought it to the attention of his operations research professor, Dr. Fran Vasko.  Together they studied the approach and Dr. Vasko confirmed Nathan's suspicions that the approach did not guarantee the optimal solution to the assignment problem (as claimed by the authors).  Nathan Betts and Dr. Vasko wrote a rebuttal paper proving by counter example that the proposed method in the paper by Yadaiah and Haragopal does not guarantee the optimal solution to the assignment problem.

The paper by Mr. Betts and Dr. Vasko entitled "Solving the Unbalanced Assignment Problem: Simpler is Better" was recently published in the AJOR, 2016, 6, pp. 296-299 (click here to read it!).  Due to the circumstances surrounding the paper, the editor waived the open access fee for the Betts and Vasko paper. 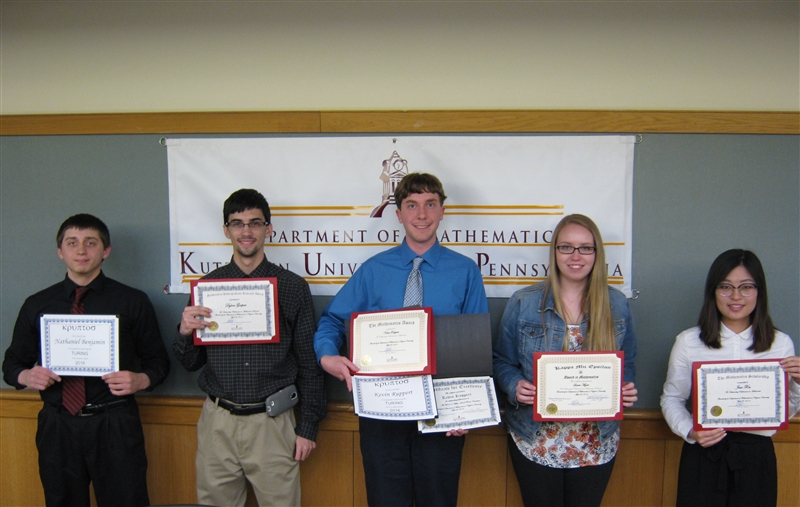 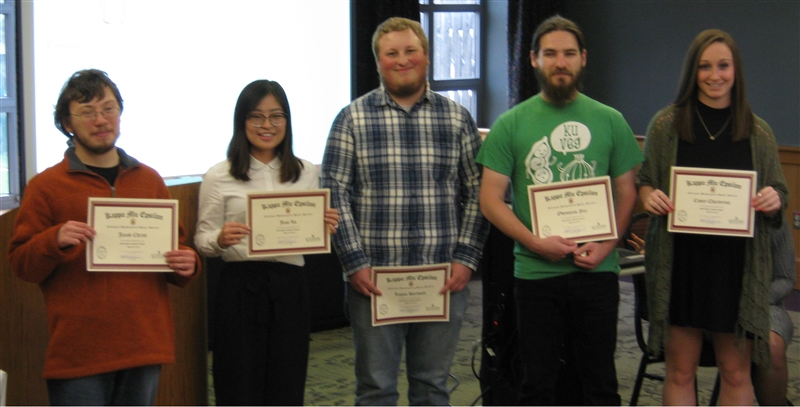 Please join us in congratulating our Spring 2016 graduates, as well as celebrating the following students' achievements:

Congratulations to Mathematics major Danielle Sienko for her receipt of a copper Chambliss Student Academic Achievement Award in the categories of successfully completed research projects and outstanding service to the Kutztown University community. She has developed a solution procedure that can easily be used to assign class times to final exam time slots such that the number of students that are scheduled for three exams in one day is minimized. 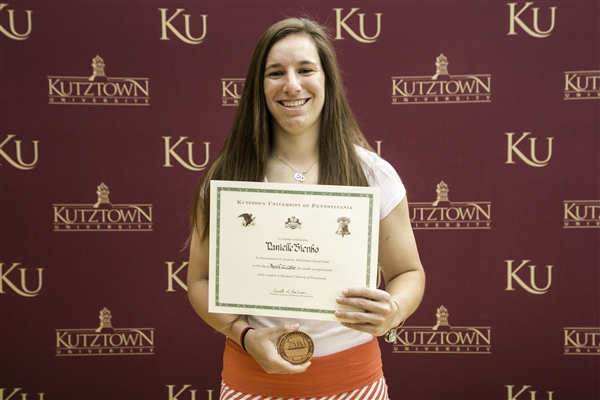 She has been able to show that using this mathematical approach reduces the number of students with three final exams scheduled in the same day by about 50%.

Due to her continued work with the registrar's office, her approach will be implemented in Fall 2016.

UPDATE (October 7, 2016): The number of students scheduled for three exams in one day in Fall 2016 would have been 956 under the "old" system; this was reduced to 416 by implementing Danielle's algorithm.

Congratulations to Mathematics majors Nathaniel Benjamin and Kevin Ruppert for cracking all three cryptograms and earning the TURING level of achievement in the 2016 Kryptos undergraduate cryptanalysis contest. Nathaniel and Kevin were one of 18 teams out of 92 teams that competed to attain this distinction. Congratulations to Computer Science majors Tom Kratz and Bill Schilling for cracking two of the three cryptograms to earn the BABBAGE level of achievement. Tom and Bill were one of 18 teams to attain this distinction.  http://www.cwu.edu/math/kryptos-6-results

We are excited to announce that Kevin Ruppert earned 10 points (77.9 percentile) in the 2015 William Lowell Putnam Mathematical Competition, which put him up against the best students from across the United States and Canada.  Well done!

Two Kutztown mathematics students spoke at the Mathematical Association of America (MAA) Sectional Meeting at Muhlenberg College.  Dylan Gaspar spoke about "A Steiner Optimization of the Cable Trench Problem" and Richard Lichtenwalner discussed "An 'Unreal' Infinity".  They were accompanied by their advisors, Dr. Landquist and Dr. Kronenthal, respectively. 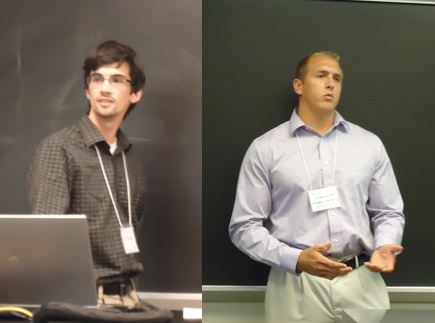 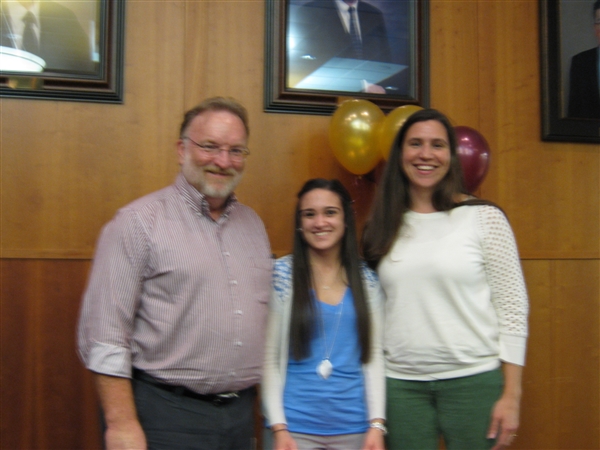 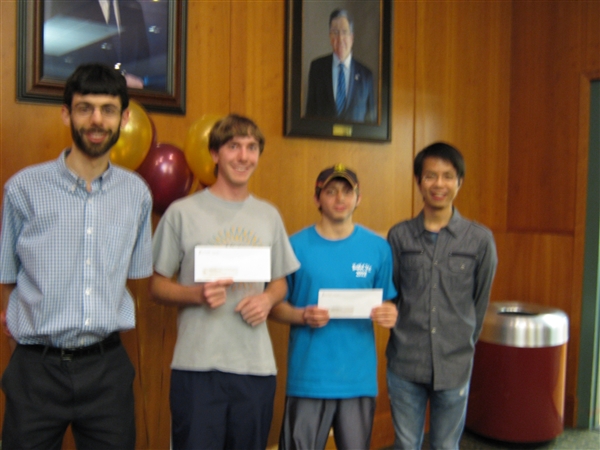 The Department of Mathematics met today to celebrate the many achievements of our students.  Congratulations to all of our Fall 2015 graduates, as well as the following award winners:

Ms. Jiao Xu, a mathematics major in her junior year, gave a presentation titled "Coinbinatorics" at the Mathematical Association of America (MAA) Sectional Meeting at Delaware Valley University. She attended this conference with Dr. Wong, her research advisor, and Dr. Kronenthal.​ 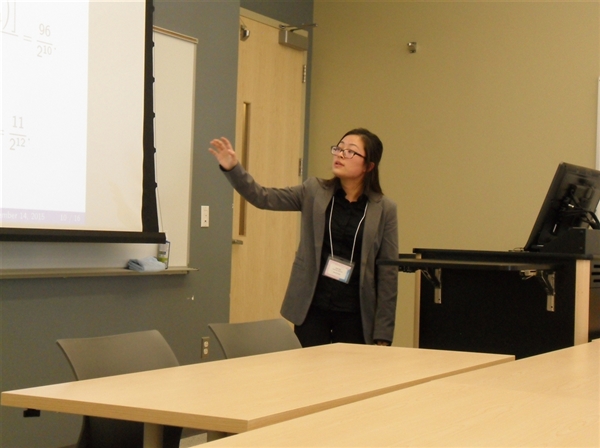 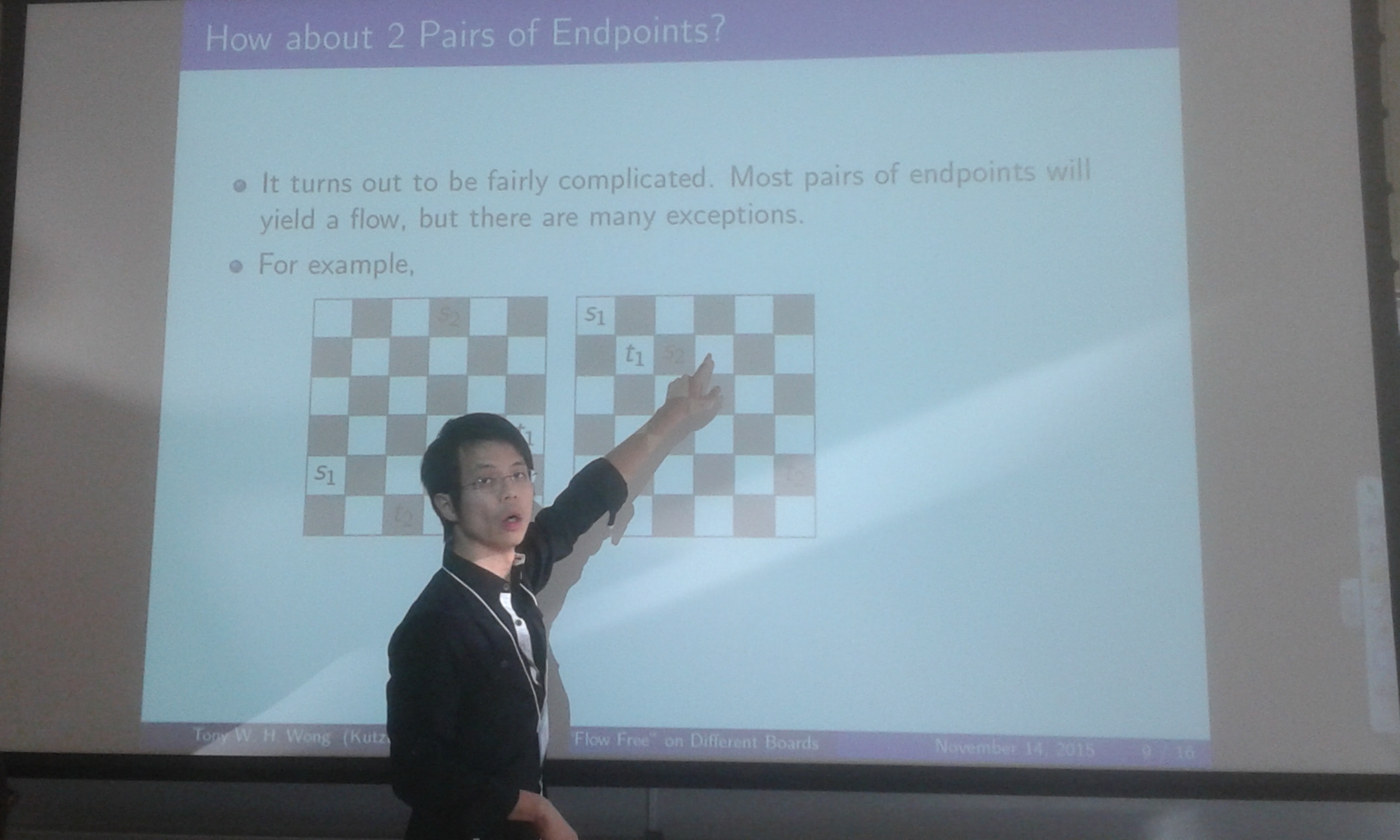 Ten Kutztown students competed in the Lehigh Valley Association of Independent Colleges (LVAIC) Mathematics team competition.  They all represented Kutztown very well!  Our KU teams ranked ahead of the teams from DeSales, Muhlenberg, Moravian, and Cedar Crest, only finishing behind teams from Lafayette and Lehigh.

Students interested in participating in next year's competition, who did not compete this year, are encouraged to please let Dr. Kronenthal know.  Also, students may be interested in problem solving training sessions offered by Dr. Wong.

Congratulations and great job to all of our competitors!

Kutztown University's Department of Mathematics was recently highlighted for its cutting-edge work in applied mathematics at the 8th International Congress on Industrial and Applied Mathematics (ICIAM), August 10 - 14, 2015, in Beijing, China. KU was one of only nine institutions in the world to be recognized.

KU's Department of Mathematics' applied mathematics research was highlighted in a six minute video that was broadcast at the conference. The video focuses on the 2002 seminal paper on the Cable-Trench Problem (CTP), which was authored by Dr. Francis Vasko, Dr. Ken Stott, Mr. Rob Barbieri, Dr. Brian Rieksts and Mr. Ken Reitmeyer. Stott was a Bethlehem Steel researcher (now retired). The other three co-authors are Kutztown University graduates. Extensions and applications of this CTP work have been published world-wide in research journals.

In the video, Landquist discusses recently published work with Vasko on extensions of the CTP that have applicability to improving medical imaging. Zyma discusses his Master's thesis research in which he uses the CTP to find a cheaper cabling network to connect an array of radio telescopes for inclusion into LOFAR, the world's largest connected radio telescope.

Members of the Kutztown University applied mathematics faculty are also very involved in the development of new solution approaches for solving complex combinatorial optimization problems that have many real-world applications. In the video, Lu discusses the need for metaheuristics as key solution strategies for these very difficult problems.