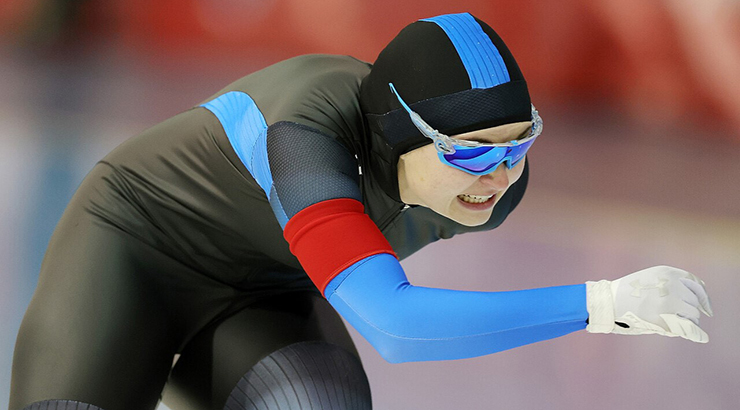 KUTZTOWN, Pa. – Kutztown University alumna McKenzie Browne ’19 competed at her first USA Olympic Trials for long track speedskating this month. Browne has been skating on ice for only three seasons but has an extensive and successful history with competitive inline speedskating.

A Coopersburg, Pa. native, Browne lives in Salt Lake City, Utah. She competed in the 500m and 1000m events during the week of Jan. 3.

The Trials were held in Milwaukee, Wisconsin, where Browne placed sixth in the 500m and eighth in the 1000m. Qualifying for the Olympic Team is not an easy feat. For each of the women's events, there are two spots available. Individuals must place in the top two to be selected for the team. Those spots are decided over the course of the season during the World Cups based on how USA performed at the combined four events.

Browne's goal is to make the 2026 Olympic team. She grew up as an inline speedskater, where she trained most of her life in the Lehigh Valley. She first began skating at Bethlehem Skateaway in 2003 and has since won 13 national titles. Browne also competed in track cycling from 2015-19, before making the full switch to long track speedskating. She has raced at the Velodrome in Trexlertown and hopes to return there this summer for more races.

Browne knew she wanted to switch to the ice when she saw several of her inline skating friends make the Olympic Team in 2018. After that, she decided that once she graduated from KU in 2019, she would make the move to Salt Lake City. That was the start of her ice-skating career.

"My favorite thing about the sport is the adrenaline rush that you get from each race and knowing that there's always something more to be learned each time I step on to the ice," Browne said. "I also love how many friendships I've been able to form with some incredible athletes from around the world. The comradery really is what makes these small sports so special."

Browne and a current senior at KU, Jazzmyn Foster, qualified to compete at the 2019 Inline Speedskating World Championships hosted in Barcelona, Spain. During the same year, Browne won four gold medals at the National Championships. Her speedskating career has created traveling opportunities for her as she has competed in Argentina, Belgium, Colombia, China, Italy, the Netherlands, South Korea, Spain and Taiwan. It was also her passion for inline speedskating that introduced her to her ice-skating career and Olympics opportunity.