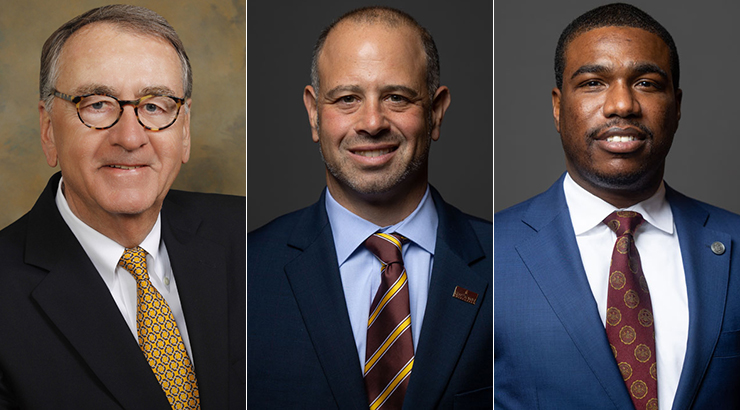 The 11-member KU Council of Trustees sets broad policy and direction for Kutztown University of Pennsylvania with the assistance of the university president.

Grim is a life-long resident of Kutztown, where he has practiced law since 1969. He holds a bachelor's degree in history from Lafayette College and is a graduate of the Villanova Law School. He is currently serving as chairperson of the council after completing a term as vice chair in 2022.

Grim was a recipient of the Kutztown Outstanding Community Citizen Award. He is the grandson of James S. Grim (1873-1949), an 1893 graduate of Keystone State Normal School (KSNS) who taught physical science at KSNS from 1900-45. The Grim Science Building is named in his honor.

Giorno joined the KU Council of Trustees in 2013. Giorno is employed by Malady and Wooten LLP, Harrisburg, focusing on governmental and public affairs. He is currently the vice chairperson of the council, after completing a term as secretary in 2022.

Prior to joining Malady & Wooten, Giorno was the executive director of the REACH Alliance, Pennsylvania's leading school choice advocacy organization. During his tenure, REACH secured passage of the Educational Improvement Tax Credit (EITC) Program, which has been hailed as a national model for providing parents with choices in their children's education and funding innovative programs in public schools.

Giorno began his career in public policy on the staff of Governor Ridge's reinventing government IMPACCT Commission. He then went on to serve on the staff of State Representative Colleen A. Sheehan and in the public affairs office of the Archdiocese of Philadelphia. Giorno currently is vice chairman of the Bridge Educational Foundation and Treasurer of the REACH Alliance. He earned a bachelor's degree in public administration from KU in 1994.

Harden joined the KU Council of Trustees in 2020. He is currently serving as secretary of the council. Harden is a trial lawyer with the law firm Ross Feller Casey, LLP, Philadelphia, Pa., where he works to rebuild the lives of people after catastrophic events. He has worked on a series of significant cases, including as second-chair trial counsel in a record-setting $9.6 million verdict in a Berks County medical malpractice case (the highest personal injury verdict in Berks County history). He also worked the exoneration of Terrance Lewis, a Philadelphia man who served more than 21 years in prison for a crime he did not commit. In June 2020, Harden won a record-breaking $6.25 million settlement for Lewis, the highest non-DNA exoneration resolution in Pennsylvania history at the time.

Before joining Ross Feller Casey, Harden worked in the white collar and commercial litigation practice groups of national law firm Eckert Seamans Cherin & Mellott, LLC. While there, he represented corporations and their executives in sensitive government investigations and business litigation. Harden defended matters involving numerous federal and state investigative agencies, including the Department of Justice, the Federal Bureau of Investigation, the Securities Exchange Commission, the Office of Foreign Asset Control, the Drug Enforcement Administration, the Pennsylvania Attorney General's Office and numerous other state and municipal investigative and regulatory agencies.

Harden began his career as a prosecutor in the Philadelphia District Attorney's Office. He is originally from West Philadelphia and attended Philadelphia public schools. He graduated from Kutztown University in 2007 with a Bachelor of Science degree in criminal justice and paralegal studies with a minor in political science and went on to the Temple University Beasley School of Law. He is a member of Alpha Phi Alpha fraternity and has practiced and taught Taekwondo for more than 25 years. He has served in leadership positions within numerous professional associations and nonprofit organizations, including the Barristers' Association of Philadelphia, the Philadelphia Bar Association, the Public Interest Law Center, the Urban Affairs Coalition, the Pennsylvania Police Reform Working Group and the Defender Association of Philadelphia.