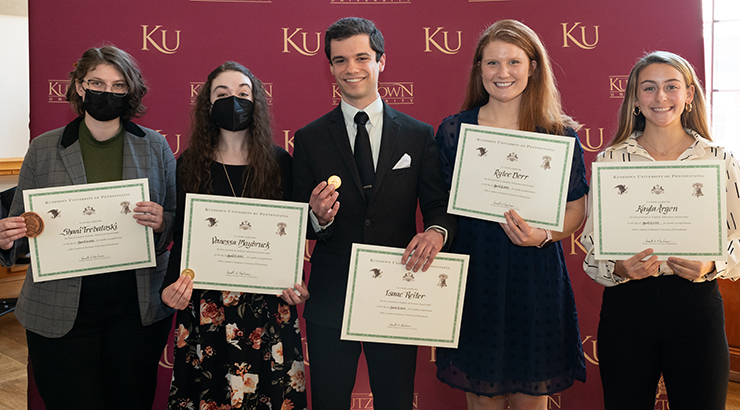 The Academic Achievement Awards were established in 2004 through a donation provided by Dr. Carlson Chambliss, KU professor of astronomy from 1970-2003. The purpose of the awards is to recognize the exceptional individual achievements of a select group of KU graduating seniors. Specially designed coin medallions of gold, silver and copper were presented to the students.

Vanessa Maybruck is an Honors student, a mathematics and mathematics education dual major with a minor in biochemistry graduating in May from Allentown, Pa. Maybruck was awarded the Chambliss Academic Achievement Gold Medal for outstanding service to the university community and successfully completed research project(s). She has been actively involved in multiple organizations on campus, including the Mathematics Department Peer Mentor Program, the Kappa Mu Epsilon Honor Society, the KU Honors Club and the KU Choirs. She has made outstanding contributions to the KU chapter of the Association for Women in Mathematics (AWM) and the IOTA chapter of the Delta Alpha Pi International Honor Society. She has served as president of AWM for more than two years, where she co-organized and coordinated several events focused on empowering women, celebrating diversity and navigating male-dominated careers as women. It was primarily her leadership that made these events a success. Maybruck has made other significant contributions to the campus community through her efforts to promote disability awareness and improve campus accessibility for individuals with disabilities. She had multiple leadership roles as an active member of Delta Alpha Pi International Honor Society for Students with Disabilities (DAP) and is currently president. Under her leadership, DAP members worked to create guidelines for making large scale campus events more accessible to all, where she hopes to publish these guidelines for general campus use. Maybruck is KU's nominee for the State System's Syed R. Ali-Zaidi Award for Academic Excellence. Maybruck plans to obtain her Ph.D. in applied mathematics to become a professor and prolific mathematical modeler.

Isaac Reiter is an Honors student, a mathematics major graduating in May from Fleetwood, Pa. Reiter was awarded the Chambliss Academic Achievement Gold Medal for successfully completed research project(s). Reiter has been an active researcher and presenter in the areas of cryptography, number theory and graph theory. These areas of interest, along with his experience in computer programming, has led to two general research projects. His work with a project involving playing card cryptosystem led to a new discovery of vulnerabilities in current cryptosystems. His findings allowed him to improve the security of Card Chameleon and has created a new secure and efficient playing card system called VICCard. In his other project that focused on problems of graph theory, a field of discrete mathematics that studies network structure, Reiter has demonstrated an exceptional research ability. He currently has two publications on his research in reputable professional journals, a third publication in an undergraduate journal and has an Honors capstone thesis. He has presented his research at local conferences, graduate student seminars and regional and national professional conferences. Reiter intends to pursue a Ph.D. in mathematics and has a goal of becoming a professor.

Kayla Argen is a sport management major graduating in May from Cresco, Pa. She was awarded the Chambliss Academic Silver Medal for noteworthy achievements in athletics. Argen was captain and center midfielder for the nationally ranked KU women's soccer team, where she helped lead the Golden Bears to a successful 17-1-2 season in 2021 and participate in the PSAC and NCAA tournaments. She was named to the United Soccer Coaches All-America First Team and D2CCA All-America Third Team, the eighth player in program history to earn All-America status and only the third to receive the recognition from multiple organizations in a single season. She has been an active member of the women's soccer program all three competitive seasons that she has been a student at KU, starting in 53 of 58 career games played. Argen led KU last year in scoring with 10 goals and five assists for 25 points, which ranked fourth in the PSAC. Throughout her career, she has 17 goals and 15 assists, fifth all-time in program history for career assists. These numbers have accounted for three years due to the 2020 season being canceled due to COVID-19. Argen is planning to return to the field this fall as the NCAA granted an extra year of eligibility due to COVID-19. Her future aspirations involve a professional athletic playing career and/or a career path working in the sports field.

Corey Potter is from Reinholds, Pa. and graduated in December with a degree in geology. He was awarded the Chambliss Academic Achievement Silver Medal for successfully completed research project(s). Throughout 2021, Potter completed two separate research projects with guidance from two different faculty members and exhibited outstanding research ability and skill. In one of his projects, he worked to create 3D computer models from photographs, adapt lab-based geology research and created a method for extracting geospatial data using his computer skills. Potter worked independently to create a clear workflow that future research students can use and devised a programming solution for gathering useful data from photogrammetric models. He presented his results in person at the annual Geological Society of America meeting in Portland, Oregon in Oct. 2021. This conference is an international professional event where undergraduate students are encouraged to attend and present cutting-edge scientific research. Most presentations are given by professionals in industry, government and academia and only a select few of undergraduate students. Potter has since graduated from KU and is now in graduate school at Missouri University of Science and Technology in Rolla, Mo. He is in the Petroleum Engineering program and is working on his Ph.D.

Rylee Derr is from Lititz, Pa. and graduated in December with dual degrees in special education and elementary education. She was awarded the Chambliss Academic Achievement Copper Medal for noteworthy achievements in athletics. Derr has been a starter and member of the KU women's basketball team since 2017 and led the Golden Bears to two PSAC East titles, two PSAC Final Four appearances and the program's first NCAA Tournament since 1996. Derr is the all-time leading scorer in KU women's basketball history. She also holds the school record for three-pointers made in a game, season and career. She is a three-time All-PSAC selection, was the KU Freshman of the Year and has made the Dean’s List and been named a PSAC Scholar-Athlete every year. She was the team captain this season and returned to complete her four years of athletics due to COVID-19. In doing so, she is pursuing her master's degree in education and her reading specialist certification. Derr aspires to become a teacher and remain involved in basketball.

Shani Trebatoski is an art education and crafts major graduating in May from York, Pa. She was awarded the Chambliss Academic Achievement Copper Medal for successfully completed research project(s). Trebatoski has served as an undergraduate research assistant over the course of summer 2020 and summer 2021. Throughout the last 2+ years, she has been fully involved in the data collection and use of narrative methodologies during a research study funded by the National Art Education Foundation and a KU Bears Grant. During her study, she used narrative research – a qualitative method focused on gathering the stories of participants –to collect participants’ lived experiences to better understand the complexity of being an educator in a changing teaching landscape with specific attention to how one's own identity impacts one's role as an educator. This research is timely, as the field of art education reflects and examines the role of professional identity on views of the learner and curriculum creation that promotes equity, diversity, inclusivity and accessibility. She has been an integral part of this project; she coded the data that was collected, organized and maintained the software that contains files pertinent to each participant, maintained a field/research journal, participated in data reflections and researched background material that was vital to the study. Trebatoski co-authored a research article that focused on how white educators engage in critical social action that has been accepted for publication. She also participated in state and national scholarly presentations. She is currently teaching elementary students in Reading, where the knowledge gained from this research is being actively utilized as she works with diverse learners. She will be serving elementary students in the Reading School District and will be presenting at the undergraduate KU Inspires research symposium this April. 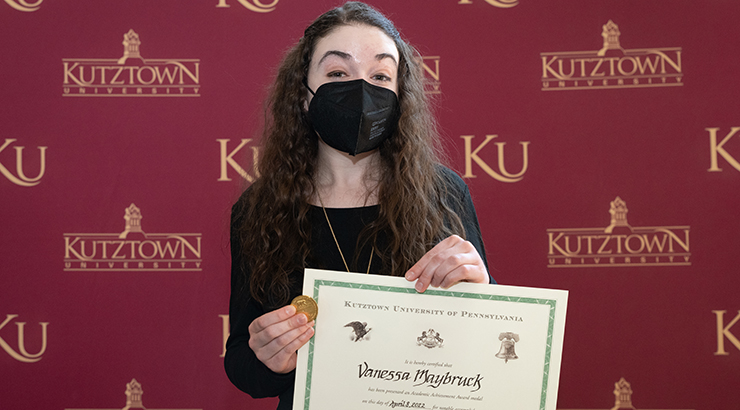 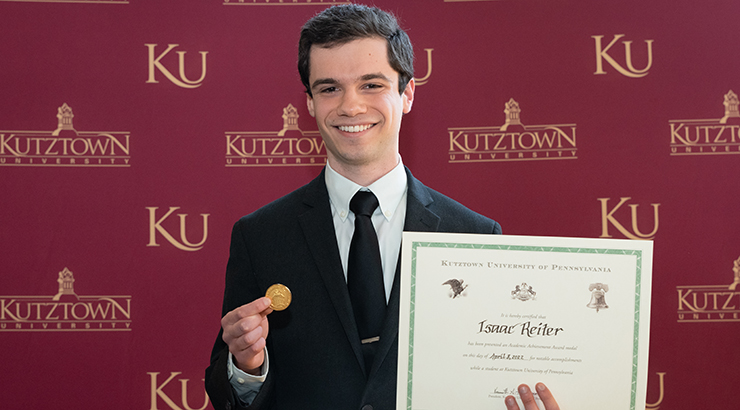 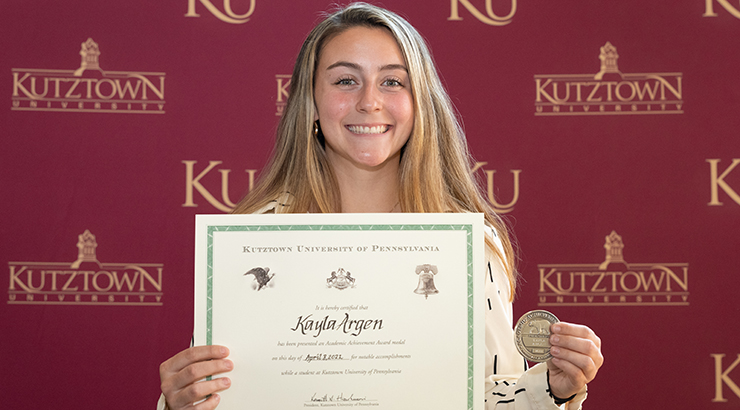 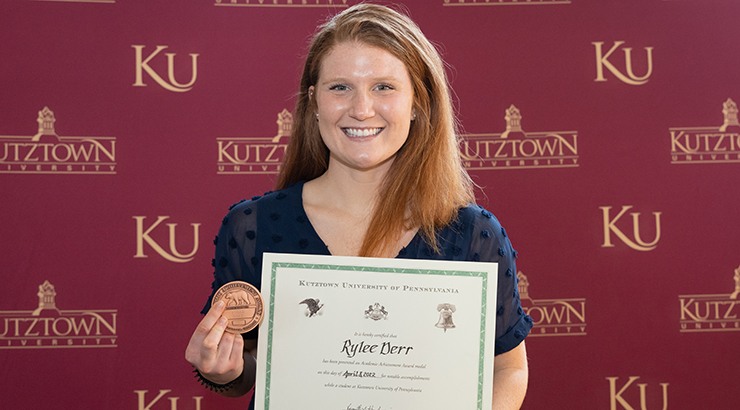 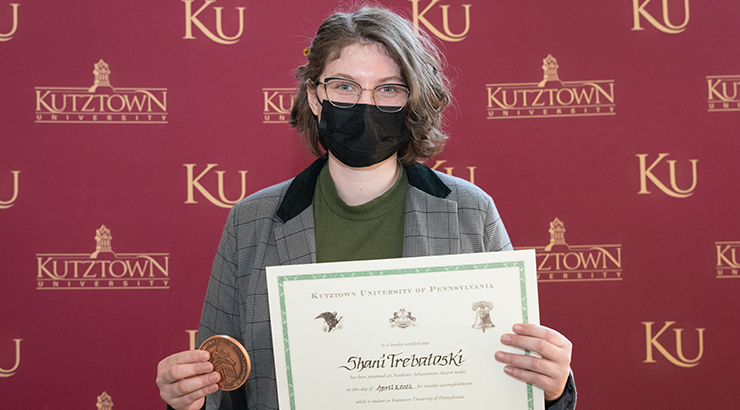