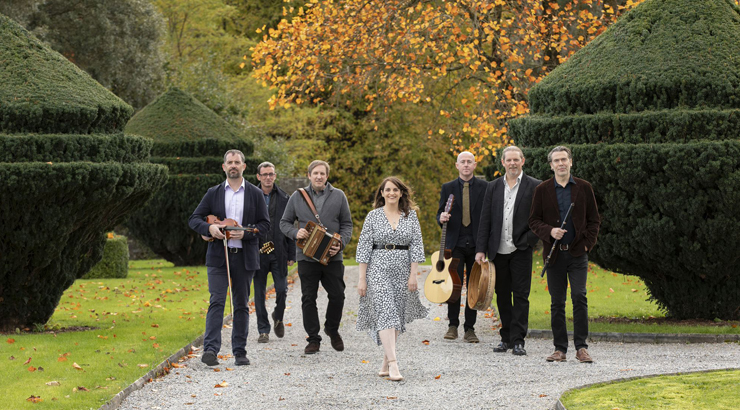 KUTZTOWN, Pa. – Wrenboys, Irish carols and a lethal slice of “Miss Fogarty’s Christmas Cake” in a popular song will give the audience a glimpse of Christmas in Ireland, when Danú makes its first stop on their American tour at 7:30 p.m., Thursday, Dec. 1 at Kutztown University’s Schaeffer Auditorium.

In a Zoom interview from his home in Waterford, Ireland, McCarthy said Sutton, a multi-instrumentalist and vocalist, has brought “a huge new dynamic to the band. He’s from one of the most Irish parts of the world outside Ireland: St. John’s, Newfoundland. A lot of (the people there) came from our area, southeast Ireland.”

Danú was founded 27 years ago by McCarthy and a group of friends, and has been performing, including international tours, and recording steadily except for 2020, when everything was locked down by the Covid pandemic. Because the members live in an assortment of far-flung places, they were unable even to record during that time.

“We couldn’t get together, and the idea of doing things remotely doesn’t sit exactly right with us,” McCarthy said. “We like to be all in the same room. We have to carefully arrange our music, and it involves everyone being together.”

Their most recent album, “10,000 Miles,” was released in 2018; they toured their Christmas program in 2019; and then their 2020 tour was canceled. During shutdown, he said, “We had time to research and listen to music. We’re working on new material all the time. We had all these ideas festering in our minds during the pandemic.”

As a result, they’re ready to spend a week during their American tour recording a new album together. And for the first time since 2019, they’ll be able to share their Christmas program once again.

“We’ve been doing Christmas programs since 2009,” McCarthy said. “We share songs, some in the Irish language; we’ll be doing “Silent Night” in Irish and English, so people can sing along. We have lots of funny songs, like the old Irish-American song, “Miss Fogarty’s Christmas Cake,” which everyone wants, and we invite fantastic Irish dancers to join for a few songs.”

They will also be sharing some of the traditions practiced in Ireland around Christmas, including St. Stephen’s Day (also called Wren’s Day) on Dec. 26. On this day, which honors one of the first Christian martyrs, there is much singing and dancing. In some parts of Ireland, like Dingle in County Kerry, the medieval practice of people in conical straw hats, old clothes and face paint parading through the village from house to house is still alive. In the past, boys (called Wrenboys) would hunt and kill a tiny winter wren, which was said to have betrayed St. Stephen to the Romans by making noises where he was hiding. They would display the dead wren during their parade; now an artificial wren is used to appease birdlovers.

Danú will bring the rollicking spirit of such celebrations to the Schaeffer stage, so people can pretend, for just a couple of hours, they are in Ireland.

When asked where they find their traditional material, McCarthy said simply, “I live it! I’m surrounded by some of the older musicians. I visit the local pub on Friday night, and play with some of the older guys. Growing up, at 14 or 15, I was fortunate; I played with guys in their 80s who have passed on. The music is based on our lives, our friends, family members. We didn’t grow up to be professional musicians. We didn’t go to college to study this. It’s just what we did all the time.”

With the revival of Celtic traditional music by world-famous bands like The Chieftains, The Battlefield Band, The Boys of the Lough, Silly Wizard and many others—including, of course, Danú—Ireland now has “thousands of young people learning this music,” McCarthy said. “It’s exponential growth. We’ve encouraged and influenced the younger musicians in our area, and they see us building a career from it.”

He said the band is thrilled to be going on tour again, sharing their music with live audiences.

“Thankfully, the computer screen didn’t win,” he said. “It’s not just us; it’s you guys, the audience, too. We all need the shared experience in the room.”

Prior to the concert, the KU Clay Club and Textile & Weaving Club will have a Pop-Up Student Holiday Art Market in the Lobby starting at 6:30 pm.

Tickets for Danú are $38; $32 for students and seniors and can be purchased at www.KutztownPresents.org, or by calling the KU Presents! Box Office 11 a.m. to 3 p.m., Tuesday through Thursday, at 610-683-4092. Established to be the center of cultural life at Kutztown University, KU Presents! serves the campus and community by bringing world-class live arts that entertain, educate and enrich.