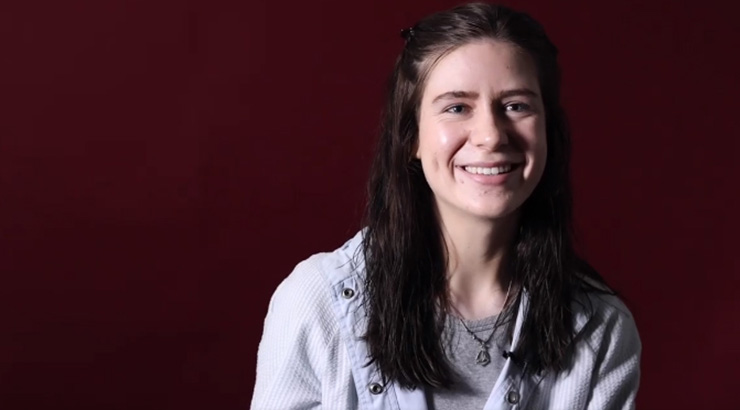 KUTZTOWN, Pa. – Kutztown University alumna Caelan Brooks ’21 was named the 2021 recipient of the American Physical Society's LeRoy Apker Award, the highest honor awarded to undergraduate physicists in the United States. Brooks won the award, "for the discovery of distinct dynamical regimes for coherent ultracold atoms confined in a ring-shaped lattice potential; and for developing a statistical model that depicts the formation of phenotypic patterns associated with bacterial biofilm growth."

The American Physical Society is the world's premier organization for physics. The LeRoy Apker Award recognizes outstanding achievements in physics by undergraduate students and provides encouragement to students who have demonstrated great potential for future scientific accomplishment.

Brooks marks the first student in the Pennsylvania State System of Higher Education to win the award. She is a native of Bear, Del., and is currently pursuing a Ph.D. in physics at Harvard University.

"The selection process is highly competitive and the assessment is done by some of the leading scientists in the world," said Dr. Kunal K. Das, professor of physics who worked with Brooks. "This year, the committee was chaired by a famous Nobel Prize winning physicist. Only two awards are made every year in the country."

Brooks is the first author on three papers tied to her work and was the recipient of the Chambliss Academic Achievement Award Gold Medal in Spring 2021, the KU Sesquicentennial Academic Honors Scholarship and the State System's Syed R. Ali-Zaidi Award for Academic Excellence.

Through a Research Experiences for Undergraduates (REU) program at Boston University, Brooks also investigated the emergence of unique phenotypic patterns in Bacillus subtilis bacterial biofilms. With professor Joseph Larkin of BU and professor Andrew Mugler of the University of Pittsburgh, Brooks created a model for the underlying intercellular interactions that describe the emergence of macroscopic fractal-like patterns seen in experiments.

During her time at Kutztown University, Brooks maintained a perfect 4.0 GPA, was a member of the nationally ranked KU women's soccer team and served on the executive board of the local Society of Physics Students (SPS) chapter.

Learn more about KU's Department of Physics on the university website or by contacting 610-683-4447 or fernando@kutztown.edu.